This is the moment Twitter investors have been waiting for. Twitter announced Thursday that it will start showing ads to its “logged out” audience, a group of roughly 500 million people who visit Twitter every month but who don’t have active user accounts. 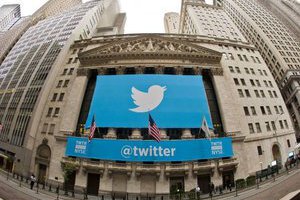 This is a huge deal for Twitter. First, it’s important to some advertisers, who don’t think Twitter has enough registered users — especially compared to Facebook — to matter, and also to Wall Street, for the same reasons. But the company has argued for years now that its audience is much bigger than the 320 million people who log in each month, and it has been telling Wall Street that it can make money off people without Twitter accounts. Now it’s finally doing that. The Street seems to like to move, sending shares up about 7 percent in early trading Thursday.

The unknown, of course, is how much money these ads can actually generate. Twitter’s advertising pitch has always been anchored to the promise of relevant targeting: We know who you are because we see what you tweet, who you follow and what kinds of things you engage with. It’s the Facebook pitch, too, but it doesn’t really translate when people aren’t logging in.

Twitter COO and revenue boss Adam Bain believes these new ads — which will run in Twitter’s core “promoted Tweet” format — can still generate significant revenue; he said on Twitter’s last earnings call in October that the company believes these ads will monetize at about half the rate of usual Twitter ads. The difference will be in the targeting. Instead of monetizing a user’s interests, Twitter will monetize the context in which a user comes across a tweet. For example, it may not know that you like baseball, but it knows you came to Twitter after searching for “baseball” on Google.

Twitter already does this when people search using its own search feature, Bain told. You may see promoted products based on what you search for within the app, and that’s what you can expect with these new logged-out ads, too. “I’m not suggesting that logged out will be as high signal as search results in Twitter, but we do have a lot of great signal that we’ll use about the context that user is in to bring relevant ads to the table,” he added.

Twitter continues to grow its revenue quarter over quarter despite an active user base that has hit a virtual wall. It’s one of the reasons this new strategy is so important. If Twitter isn’t going to grow significantly — it hasn’t been able to for some time — it’s going to need to find revenue from other sources. It still has plenty of options. Twitter sells ads inside other apps through developer products like MoPub, and there are still parts of Twitter that won’t show ads to logged-out users, most notably the site’s homepage.

It’s also just a matter of time before Twitter starts to syndicate ads in other places online, including Google search results. It’s tested this in the past with sites like Flipboard and Yahoo Japan, but it has never moved beyond that. Bain declined to talk about when or where Twitter’s syndication efforts might take shape, but added, “It’s only natural that ads will come in syndication as well.”

OUR POINT
Every existing product or service is the result of resources investment. And, of course, developers are looking for ways to monetize it (return on investment). For example, Twitter will show ads to people who are not even registered in the service. Many programs sell users databases to marketers. Others sell place within the app: imagine, you are chatting with somebody and suddenly you see a whole screen pop-up with an “adorable offer from the best beauty shop in the Universe”.

SafeUM business model is simple and clear. We do NOT sell advertisers the opportunity to clog up your communication. We do NOT sell users database to any organizations. We earn money by selling PREMIUM subscription, and providing calls and internet roaming at fair prices. Your communication in SafeUM will always be free of external noise and protected from prying eyes of strangers. Download SafeUM and protect yourself from junk information.
Tags:
Twitter trends
Source:
Re/code
1942
Other NEWS
3 Jul 2020