After the massacre at a San Bernardino, California, holiday party this month, a wave of speculation crested over whether one of the San Bernardino shooters had expressed outward signs on social media that she had been radicalized before being granted a US visa. 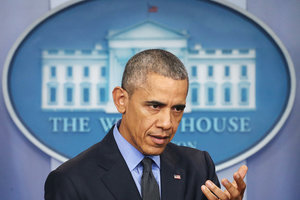 Recently, Homeland Security Secretary Jeh Johnson said that there were “certain legal limits” on such social media probes, a comment that presidential candidate Carly Fiorina criticized on stage at the Republican debate this week.

During his year-end press conference, President Barack Obama attempted to clarify what social data is and isn’t included in the vetting process. “Our law enforcement and intelligence professionals are constantly monitoring public posts, and that’s part of the visa review process,” he said. What the government doesn’t have access to, he said, are the multitude of private email, chat, and text platforms that we all use on a daily basis. That’s why, he said, it’s important for the intelligence community and tech community to work together on ways to allow the government to access that data if it has a lead on a suspected terrorist. This, of course, is precisely what Silicon Valley encryption advocates like Apple and Google have been fighting against.

“We’re engaging with the high tech community to find out how we can, in an appropriate way, do a better job, if we have a lead, to be able to track a suspected terrorist,” he said. At the same time, Obama stressed the need to be cautious about overstepping on surveillance. He reminded people of the controversy that followed Edward Snowden’s revelations about the National Security Agency’s bulk data collection program.

It was just a few years ago, he said, that “we were having a major debate about whether the government was becoming too much like Big Brother. Overall I think we’ve struck the right balance in protecting civil liberties and making sure US citizens’ privacies are preserved.”