At least five dating websites may be involved in an attack scenario that is spreading a worm to site visitors, infecting their home router and adding it to a botnet. 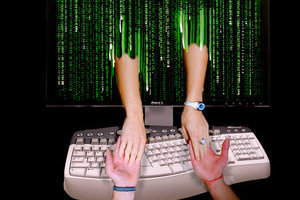 The worm is a variant of TheMoon, which was first discovered in February 2014, and works by taking advantages of weaknesses in the HNAP (Home Network Administration Protocol) protocol.

Attackers are using one-night stand dating sites to spread the worm. On each malicious website, the infection occurs via a two-step phase launched via a malicious iframe embedded on the page. The iframe works by making different URL calls to see if the router runs the HNAP protocol and if it uses the 192.168.0.1 and 192.168.1.1 for router management and as gateway IPs.

It then calls home, informing its creators of its findings. Here is where the second attack stage happens, and where a second URL is loaded in the iframe, which delivers the actual worm, a Linux ELF binary. This worm prevents users from using some of the router's inbound ports, and it also opens outbound ports through which it spreads to other routers.

Criminals are building a botnet for later use

Neither in 2014 nor in late 2015, when Damballa researchers came across this threat, did the worm have a C&C infrastructure behind it. This means the botnet is currently only in its incipient or testing stages, spreading to affected devices, in an attempt to build a larger infrastructure, which may be useful later down the road. This theory is also validated by the fact that, towards the end of the year, the worm's second-stage iframe URL was disabled, and the ELF binary removed from the download servers.

"There are different scenarios on how the criminals could bring their victims to visit an affected website via malvertising, exploit kits or phishing email. The criminals moved from scanning IP ranges for potential vulnerable home routers to embedding the attack on a website," Damballa's Loucif Kharouni explains. "It feels like this conversion to a web-based attack is new and under construction."

Damballa reports that the new TheMoon worm sample is not currently detected by any antivirus maker. The security vendor also tracked down the owner of the malicious dating site used to spread the worm and found out that he's also the man behind four other dating sites of the same nature.

The company does not believe him to be the actual criminal behind this new botnet and thinks his identity was stolen and used illegally to register the domains. In 2014, security researchers discovered that most of the vulnerable devices were various models of Linksys (Belkin) and Dlink home routers.