Setting this date on iPhone or iPad will kill your device

Don’t Try this at Home! An interesting software bug has been discovered in Apple's iOS operating system that could kill your iPhone, iPad or iPod Dead Permanently. Yes, you heard me right. 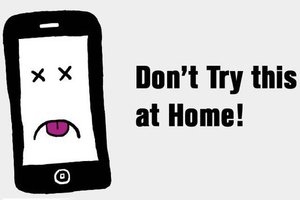 An issue with the date and time system in iOS had emerged recently when Reddit users started warning people that changing your iPhone's or any iOS device's date to January 1, 1970, will brick your iPhone forever.

You can watch the whole process in the video given below. Even regular recovery tricks do not work. So, you are recommended to Not Try This Trick with your iOS device really – unless you book a trip to your local Apple Store. While I don’t have any intention or desire to try it out with my iPhone 6s to confirm the authenticity of the bug, it is pretty much clear based on reports that seem legitimate. YouTuber Zach Straley first discovered the issue, which was later confirmed by iClarified, who tested the trick on an iOS device.

This bug affects any iOS device that uses 64-bit A7, A8, A8X, A9 and A9X processors and runs iOS 8 or newer, including iPhones, iPads, and iPod touches. However, for those running on 32-bit iOS versions are not affected by this issue.

How the Bug Kills the iPhone?

Basically, the whole process is due to this:

Set up the date to January 1, 1970, via settings on your iOS device, Reboot your device, and you are done.

Your iPhone or iPad will no longer boot and will be stuck to the Apple logo. Even recovery mode restore or DFU mode will not let you restore your device; it will remain stuck on the bootup screen.

Your device will reportedly not come back, and the only way to get it back to work once again is to take your iOS device to an Apple Store.

The Only Way to Get Your iPhone Back

The bug is believed to be related to UNIX timestamp epoch that causes the kernel to crash. The only way to get it back is to open the device's casing and physically disconnect the battery from the logic board. This could only be done with the help of Apple's Genius Bar. This process will reset the iPhone's date and allow it to boot. While there isn't any other fix at the moment, Apple is expected to come up with a software update to fix and unbrick the affected iOS devices.

Though some users are saying that letting the battery drain could make the iPhone work once again, or changing the SIM card could fix the issue, or waiting for the device to back after 5 hours, you are still advised to not try this on your device as there is no guarantee these tricks are going to work.