A new kind of Android malware steals online banking credentials and can hold a device's files hostage in exchange for a ransom, delivering a particularly nasty one-two punch. 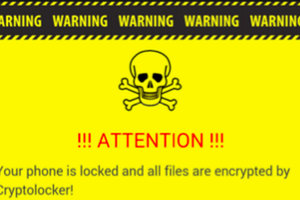 The malware, called Xbot, is not widespread yet and appears to be just targeting devices in Australia and Russia, wrote researchers with Palo Alto Networks in a blog post on Thursday. But they believe whomever is behind Xbot may try to expand its target base.

"As the author appears to be putting considerable time and effort into making this Trojan more complex and harder to detect, it’s likely that its ability to infect users and remain hidden will only grow," Palo Alto wrote. Xbot uses a technique called activity hijacking to carry out attacks aimed at stealing online banking and personal details. It essentially allows the malware to launch a different action when someone tries to launch an application. User are unaware that they're actually using the wrong program or function.

Activity hijacking take advantage of features in Android versions prior to 5.0. Google has since developed defenses against it, so only older devices or those that have not been updated would be affected. In one type of attack, Xbot monitors the app a user has launched. If it is a particular online banking app, Xbot intervenes and displays an interface that obscures the real app.

The bogus interface is actually downloaded from a command-and-control server and displayed using WebView, Palo Alto wrote. The legitimate applications are not actually tampered with. "So far we’ve found seven different faked interfaces," Palo Alto wrote. "We identified six of them – they’re imitating apps for some of the most popular banks in Australia. The interfaces are very similar to these banks’ official apps’ login interfaces. If a victim fills out the form, the bank account number, password, and security tokens will be sent," to the command-and-control server.

Xbot can also bring up an interface through WebView saying the device has been infected with CryptoLocker, a well-known ransomware program. Ransomware encrypts files and then asks for payment for the decryption key. In this case, the attackers ask for US$100 to be paid through a spoofed PayPal site. Xbot will actually encrypt files on the device's external storage. However, the encryption algorithm used is weak, and it would be possible to recover the files, Palo Alto wrote. Xbot can also scrape the phone for personal data, such as contacts, SMSes and phone numbers and send the data to the attackers.