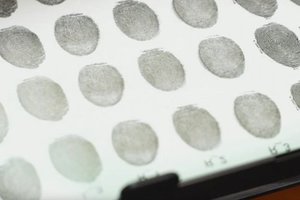 Fingerprint sensors used to secure smartphones can be fooled with something as simple as a inkjet printer, researchers from Michigan State University have shown.

A Samsung Galaxy S6 and a Huawei Honor 7 were unlocked successfully using a fingerprint printed using a standard inkjet printer loaded with special ink and paper by Kai Cao and Anil Jain from the department of computer science and engineering. The researchers took scans of several fingers and simply printed them in 2D on paper using conductive ink – ink which conducts a charge – and special paper that is typically used for printing electronic circuits and other charge-carrying systems.

They found they could replicate the process for several different fingers for several different volunteers taking very little time using common equipment. Previous spoofing attempts that require the production of a model of the fingerprint in wood glue or rubber have taken at least 30 minutes to create, often requiring special equipment and manual manipulation skill.

Cao and Jain said: “This experiment further confirms the urgent need for anti-spoofing techniques for fingerprint recognition systems, especially for mobile devices which are being increasingly used for unlocking the phone and for payment.”

The Samsung Galaxy S6 and the Huawei Honor 7 use similar fingerprint scanner technology to most of those used across devices from Google’s Nexus smartphones to LG’s G5. The same technique will likely be able to spoof many other smartphones. Some fingerprint scanners have more robust anti-spoofing technology, but even Apple’s Touch ID system, which is regarded as one of the best, was fooled within days of it being available with the iPhone 5S in September 2013.

The risk for your average user of this happening is very small, given that anyone attempting to unlock a smartphone using a printed fingerprint first requires a perfect, high-resolution scan of the fingerprint used to unlock the phone. But for law enforcement agencies, it could represent a fast and effective way of unlocking a suspect’s smartphone without resorting to backdoors.

Typically smartphone using a fingerprint sensor require the password or pin to be entered after 48 hours or once the phone has been powered off, but being able to lift a print, scan it in and print it in a matter of minutes makes 48 hours look like an ample window of opportunity as long as you don’t reset the password or let the phone turn off.

A Samsung spokesperson said: “Samsung takes fingerprint security very seriously, and we would like to assure that users’ fingerprints are encrypted and securely stored within our devices equipped with fingerprint sensors.

As the report itself points out, it takes specific equipment, supplies and conditions to simulate a person’s fingerprint including being in possession of the fingerprint owner’s phone to unlock the device. If at any time there is a credible potential vulnerability, we will act promptly to investigate and resolve the issue.” A Huawei spokesperson said: “Honor takes data integrity very seriously and we are committed to protecting customer privacy through the constant updating of new technologies, including fingerprint sensor technology.

“We are aware of various reports which make the claim that vulnerabilities exist in fingerprint sensor technology used by several manufacturers, including Honor. We have equipped Honor 7 with a chipset level security solution in which personal data in the form of fingerprint images is protected with hardware. This solution is significantly superior to that of most other Android phones. “We remain committed to developing new technologies that further enhance data privacy and security for our customers.”