Hacker squad Anonymous has leaked Donald Trump’s already public “private” phones, addresses and social security number in what they called a new phase of their “total war” against the GOP frontrunner, vowing it would get way worse. 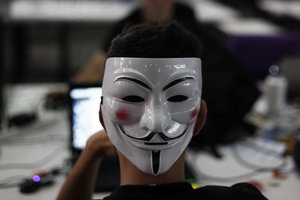 Members of the hacktivist collective have data-dumped what they claimed to be some of Trump’s most sensitive information, which includes his private cell phone number, SSN and address of his Palm Beach resident in Florida.

Moreover, the “doxxing” has targeted Trump’s personal agent and legal representatives, whose phone numbers have now “gained publicity.” “These are provided for informational purposes only,” Anonymous said in a YouTube video. “… That might be able to assist you all in independently investigating this would-be dictator.” While the latest “leak” was advertised as a Phase-II in the operation against Trump, some in the hacktivist collective pointed out that the released information was already publicly available or no longer accurate.

In fact Donald Trump himself shared the “private” cell phone number back in August of last year on Twitter. Anonymous is calling this anti-Trump operation #OpWhiteRose, after a non-violent resistance group in Nazi Germany. Hackers announced the operation on March 16, saying that its major goal was “to unite to fight fascism”.

“The White Rose Society has risen again in the United States. They are at Anti-Trump protests, and rallies in support of their Muslim and Latino neighbors,” the hacktivist collective said. Just two days ago Anonymous declared “total war” on Trump, calling on fellow hacktivists to unite with them in an attack against all of his websites on April Fool’s Day. Dubbed #OpTrump, the operation is aiming to “dismantle” Trump’s presidential campaign and “sabotage his brand.”

Earlier in March, Anonymous already leaked some of Trump’s voicemail messages from 2012, which unsurfaced American liberal media’s support for the billionaire. The hacktivist group first threatened Trump with war in December, when he said he would look to ban all Muslims from entering the United States. Since then, they’ve taken down Trump Tower website and launched a petition, calling to ban Trump from entering the UK which gained more than half a million signatures.