‘Ready to fire’ cellphone-shaped double-barrel handgun could be released

A new two-shot, double-barreled handgun can be neatly folded into the shape of a box resembling a smartphone – and its release is making police nervous. 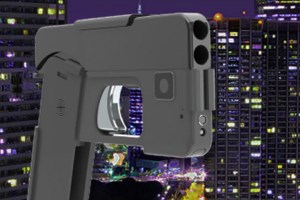 The concept handgun, patent pending, would be manufactured by Ideal Conceal, a Minnesota startup. The .380 caliber pistol is small enough to be folded into a palm-sized square that can be easily slipped into a back pocket.

Because it looks similar to a smartphone, it could be left out in plain view on a shop counter without arousing suspicions. “Ingeniously designed to resemble a smartphone, yet with one click of the safety it opens and is ready to fire,” says the company website. The grip conceals the trigger and trigger guard. So far the company has only posted concept photos of the weapon on its website. The gun is being promoted for its high velocity and accuracy and will have a list price of $395.00 when it becomes available in mid-2016.

The concealed handgun caught the attention of Karl de la Guerra, who works in security and considers the handgun a new threat to police. Ideal Conceal has a target market in mind. “Specializing in concealed weaponry, we aim to deliver a high quality handgun that can be deployed very quickly for defense of your or your family,” the company’s website reads. “From soccer moms to professionals of every type, this gun allows the option of not being a victim.”

There have been other folding pistols in the past. North American Arms made a folding revolver that could be concealed. However, NRA Museums director Jim Supica told that they “still look like guns,” whereas the gun from Ideal Conceal doesn’t.

Too often the reason cited by police in the shooting deaths of unarmed citizens is that the officer or the public assumed that a suspect was reaching for a gun in a waistband, or that a toy gun looked like a real one, as was the case in the shooting-death of Tamir Rice, a 12-year-old Cleveland boy.

That’s worrying to police officers. “In general, the concept of any kind of weapon that’s disguised, so that it’s not apparent that it’s a weapon, would be cause for concern,” Bill Johnson, executive director and general counsel for the National Association of Police Organizations, told.