Got a smart lock connected to the Samsung's SmartThings platform? Click the wrong link or download the wrong app, and hackers could take it over, researchers say. 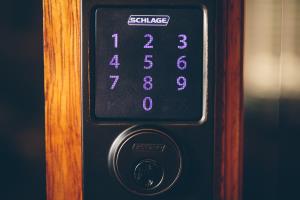 The claim comes from a report titled "Security Analysis of Emerging Smart Home Applications" published by a team of security researchers from Microsoft Research and the University of Michigan. In it, the team details four potential attacks hackers could use against Samsung's connected home platform.

The first is a phishing attack aimed at anyone using a specific, unnamed third-party Android app designed to control SmartThings systems. In it, the hacker sends the target a malicious link. If the user clicks the link, they'll be redirected to the SmartThings website -- if they enter their credentials, the hack will exploit a redirect bug in that third-party app and capture specific log-in data, letting them "inject" a new code into a SmartThings-controlled door lock.

The other three attacks require users to download malware directly from SmartThings' app store, though the researchers declined to see if they could sneak that sort of malware into SmartThings' SmartApps store for legal and ethical concerns.

In an official statement, a SmartThings representative says that malware attacks like these "have not and would not ever impact our customers because of the certification and code review processes SmartThings has in place to ensure malicious SmartApps are not approved for publication."

The report comes at a time when user frustrations with Samsung's connected-home platform are already at a boil or close to it. In a blog post published last month, the creator of the popular third-party SmartThings app "Rule Machine" said he will stop supporting his software on SmartThings, citing "ongoing serious degradation of the SmartThings platform" that causes Rule Machine to "function in unpredictable ways."

SmartThings representatives have already been working to handle fallout from Rule Machine's end and the reliability concerns that led to it, with CEO Alex Hawkinson going so far as to post an apology to users on the platform's blog.

Today, just over a week later, Hawkinson has published another blog post. In it, he acknowledges the vulnerabilities but calls them "hypothetical," and goes on to claim that SmartThings has been working with the researchers for the past several weeks. He adds that SmartThings has "already implemented a number of updates to further protect against the potential vulnerabilities disclosed in the report."

"Even though current customers have not been impacted, we take the recommendations of Mr. Fernandes, Dr. Jung, and Dr. Prakash seriously and are grateful for all opportunities to continue to improve the security of our platform," says Hawkinson.