Flying Internet: who needs it and why 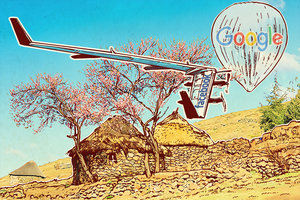 The aircraft’s design is of flying wing type, with a wingspan close to that of Boeing 737, covered with solar panels. Besides solar panels, the drone is equipped with batteries which serve as a source of energy during nighttime. Pillars hold four electric engines which rotate propellers.

There is also an on-board computer that navigates the aircraft through the predefined trajectory and is also responsible for communication with the ground. To contribute to the drone’s lightweight construction, it lacks wheels and take off using a special wheeled platform pushed by a vehicle. All in all, it cannot carry any heavy load and is completely useless as a means of transportation of passengers or cargo. But it was designed for another mission, after all.

Its biggest attribute is the ability to fly long periods without landing. During its trial flight Aquila had not landed for over two weeks; commercial drones — project developers said — would be able to hover in the air for months, landing occasionally for maintenance.

From the technical standpoint, the drone is quite simple. When in the air, it mostly hovers due to anabatic winds as an engine-free glider. Available solar capacity is more than enough to keep the drone powered up constantly. The excess of energy is used to power the items of ‘useful load’ on board — like meteorological sensors or a camera. However, Aquila’s true purpose is to serve a keen of an ultra-low flying satellite providing connectivity to remote rural territories with zero to minimal network coverage. As a satellite, Facebook’s drone is connected to the ground station, using an aerial laser, as well as to other client devices, and other drones, effectively increasing, through this ‘relay’ approach, a reach to the closest ground station.

The difference between this drone and a satellite is the altitude: usually satellites are positioned hundreds of thousands of feet above the ground. Facebook’s drone hovers just several thousand feet above the ground. That means, data is exchanged at a higher rate and for less money. To put it simply, using satellites to feed connectivity to remote locations is as efficient as cracking a nut with a sledgehammer, since connectivity is needed for several secluded villages deep in the rainforest, but not for the entire Amazon basin, or South American continent.

It’s time we mentioned Google’s Project Loon which, in essence, was run to position base stations on air balloons. As with Facebook’s drones, they connect subscribers and beam to others of their kind using radio connections. The balloons have less mobility, though: they are static, relative to the ground. It’s achieved through their ability to maneuver along the aforementioned anabatic winds, and inflate/deflate slightly to adjust the altitude.

This job is taken care of by an on-board computer, which obtains necessary relevant data from other air balloons. That means, the system is aware of air flow data and uses it to ensure the balloon is always positioned in one atmospheric zone. What we need to understand here is that the base station is no longer required to be static: after all, you are able to access both mobile and Wi-Fi networks when moving. If the distance does not exceed several miles, even a moving aircraft or balloon would be ‘seen’ by any, even extremely narrow-beam antenna. Google’s balloons, as a trial showed in 2015, would be able to remain airborne, without recharging, for about 100 days at the 18 km altitude.

However, there is a question: why would Internet companies, and not network carriers, take care of it? It’s the latter’s job to provide network coverage, after all. But here’s the truth. Population of developed countries is already connected to the Internet, while rural areas with lowest Internet penetration are mostly third-world countries which dramatically lack infrastructure, including such commodities as electricity. One can charge batteries from the diesel generator, but there’s no continuous availability of electric power.

It goes without saying the people there are poor, and no carrier would invest into the network backbone, as their massive investment is unlikely to ever be returned. As for Facebook and Google, they need those people. The companies can sustain further growth only by acquiring new users and thus need new connections. So, since all of users from regions with high rates of Internet penetration are already in the game, new users should start getting involved and become new viewers of online advertising, those companies’ main source of revenue.

It’s clear the people on the other side of the ‘digital divide’ won’t be able to afford Internet subscription. But ultimately they won’t be paying; as with the TV, broadcast TV is usually free of charge, yet TV channels feel quite good promoting products, services, people and ideas, which eventually drives return of investment into broadcasting infrastructure and content creation.

And imagine how much data on billions of new people would become available to Internet companies once users start to enjoy social networks or search engines! It is, essentially, the idea of the true world dominance. If it allows one to concentrate global power in your hands, pursuing a seemingly crazy idea based on weird airborne crafts does seem a productive approach.