The latest victim in a long line of high-profile twitter attacks is the CEO of Pokemon Go developer Niantic, John Hanke.

On July 31, a series of Tweets was posted to Hanke's 16,000 followers. They were hashtagged "OurMine" and claimed the hack was for Brazil, where Pokemon Go has yet to be released.

One tweet also claimed that Hanke's password was "nopass," but the Quora links to the hacker's explanations have been removed. Interestingly, OurMine is a company that claims to assess social network account security, so the hack seems like a marketing stunt, directing users to upgrade account security. Nevertheless, over on the hashtag, the stunt has gained a reaction, including people in Brazil who think the hack is a poor way to get a point across, and players in other countries who object to the recent update to the game. Exactly how OurMine gained access to Hanke's password is unknown. The company did not immediately reply to a request for comment. 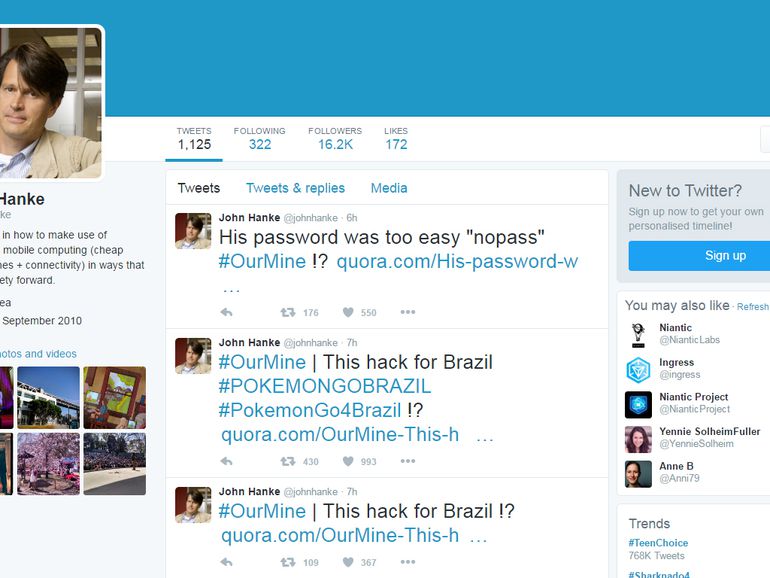 OurMine has gained notoriety for hacking into the social media accounts of various technology executives, among them Google CEO Sundar Pichai, Twitter and Square CEO Jack Dorsey and Facebook CEO Mark Zuckerberg. The group also claimed credit for a distributed denial of service (DDoS) attack on Pokémon GO’s servers earlier in the month.