Almost exactly a year ago, Chrysler announced a recall for 1.4 million vehicles after a pair of hackers demonstrated that they could remotely hijack a Jeep’s digital systems over the Internet. 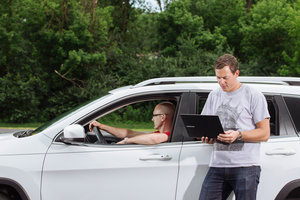 For Chrysler, the fix was embarrassing and costly. But now those two researchers have returned with work that asks Chrysler and the automotive industry to imagine an alternate reality, one where instead of reporting their research to the automaker so it could be fixed, they had kept working on it in secret—the way malicious hackers would have.

In doing so, they’ve developed a new hack that offers a sobering lesson: It could have been—and still could be—much worse. At the Black Hat security conference later this week, automotive cybersecurity researchers Charlie Miller and Chris Valasek will present a new arsenal of attacks against the same 2014 Jeep Cherokee they hacked in 2015.

Last year, they remotely hacked into the car and paralyzed it on highway I-64—while I was driving in traffic. They were even able disable the car’s brakes at low speeds. By sending carefully crafted messages on the vehicle’s internal network known as a CAN bus, they’re now able to pull off even more dangerous, unprecedented tricks like causing unintended acceleration and slamming on the car’s brakes or turning the vehicle’s steering wheel at any speed.

“Imagine last year if instead of cutting the transmission on the highway, we’d turned the wheel 180 degrees,” says Chris Valasek. I can imagine. But he spells it out anyway. “You wouldn’t be on the phone with us. You’d be dead.” Unlike last year, Miller and Valasek who now work at Uber’s Advanced Technology Center, can’t perform those new attacks over the Internet—only with a laptop directly plugged into the Jeep’s CAN network via a port under its dashboard.

Thankfully, their previous work helped Chrysler create a security update to fix the flaw that gave them their earlier, remote access to the Jeep’s guts. This hack, however, is still possible on patched Jeeps like the one they tested. And the real reason for extending their Jeep attack is to demonstrate what the full consequences of a digital attack on cars or trucks would have looked like in the absence of that patch; Their full-speed attack on the Jeep’s steering and acceleration is what could happen the next time sophisticated hackers find a wireless foothold on a vehicle’s network.

And make no mistake, auto hackers say: there will be another wireless car attack method found sooner or later. “There will almost certainly continue to be remote vulnerabilities in the future,” says Karl Koscher, a researcher at the University of California at San Diego who found one of the first car-hacking techniques for GM’s Onstar in 2010. Miller and Valasek’s latest work shows, he says, that “if you can get on the right CAN bus through those vulnerabilities, you can use these techniques to take pretty dramatic control of the car.”

Here’s a video of their steering attack demonstration:

How the New Attacks Work

Instead of focusing on that initial wireless foothold, this time Miller and Valasek wanted to to bypass a set of safeguards deeper in vehicles’ networks. Vehicle CAN network components are designed to resist certain dangerous digital signals: The diagnostic mode that Miller and Valasek used to disable the Jeep’s brakes, for instance, wouldn’t work at any speed above five miles per hour, and the automatic parking assist feature they used to turn its steering wheel only worked when the vehicle was in reverse and traveling at the same low speeds.

But Miller and Valasek have now found techniques to bypass some of those safeguards, with disturbing results. Here’s how their new attacks worked: Instead of merely compromising one of the so-called electronic control units or ECUs on a target car’s CAN network and using it to spoof messages to the car’s steering or brakes, they also attacked the ECU that sends legitimate commands to those components, which would otherwise contradict their malicious commands and prevent their attack.

By putting that second ECU into “bootrom” mode—the first step in updating the ECU’s firmware that a mechanic might use to fix a bug—they were able to paralyze that innocent ECU and send malicious commands to the target component without interference. “You have one computer in the car telling it to do one thing and we’re telling it to do something else,” says Miller. “Essentially our solution is to knock the other computer offline.”

The result: They’re now able to override contradicting signals that tell the parking brake not to activate, for instance, and thus bring the vehicle to a halt from any speed in seconds. And in combination with another vulnerability they found in the steering module ECU, they can disable the steering so that the wheel resists the driver’s attempts to turn it.

They can also digitally turn the wheel themselves at any speed. When they tested that last attack while driving at 30 miles per hour on an empty road running through cornfields north of St. Louis, Miller and Valasek say they lost control of the Jeep, crashed it into a ditch, and had to wait for a friendly local to tow them out.

In a separate attack that doesn’t require any such ECU bootrom tricks, they also found they could turn on and alter the settings on the Jeep’s cruise control, allowing them to accelerate the Jeep by tens of miles per hour in a few seconds. But they note that as with any cruise control, the driver could simply hit the brake to disable that unintended acceleration—if they notice that it’s happening.

A careful driver with two hands on the wheel could also overpower the steering attack, too, Miller and Valasek admit. But if the attack took a driver by surprise, it could still do damage. “It’s not like I can just take control of the car and drive you to my house and you can’t stop me,” Miller says. “But if you’re not paying attention, it’s definitely dangerous.”

When experts reached out to Chrysler’s parent company Fiat Chrysler Automobiles, (FCA) the company responded in a statement emphasizing that Miller and Valasek’s attack could not have been performed remotely. “This demonstration required a computer to be physically connected into the vehicle’s onboard diagnostic (OBD) port and present in the vehicle,” FCA’s statement reads.

“While we admire their creativity, it appears that the researchers have not identified any new remote way to compromise a 2014 Jeep Cherokee or other FCA US vehicles.” The statement also claims that Miller and Valasek’s Jeep “appears to have been altered back to an older level of software,” the company adds. “It is highly unlikely that this exploit could be possible…if the vehicle software were still at the latest level.”

Miller and Valasek confirm that as part of their earlier testing, they did install on their Jeep an older version of the infotainment software that Chrysler patched to prevent remote attacks. But they dispute Chrysler’s claim that patch against remote attacks would have made any difference: Their latest work, they say, didn’t touch that infotainment system at all, focusing on other components of the vehicle altogether.

What This Means For Future Car Hacks

Though Miller and Valasek haven’t found a new way to perform their attacks remotely, it’s not hard to imagine new avenues hackers could find to remotely access the Jeep’s CAN network or those of other vehicles.

In 2011, researchers at the University of California at San Diego and the University of Washington found ways into a Chevy Impala’s innards that included everything from its OnStar connection to a hacked smartphone connected to its infotainment system via Bluetooth to a CD containing a malicious file inserted into its CD player. And last year some of the same UCSD researchers showed that common, Internet-connected insurance insurance dongles plugged into vehicles’ dashboards could create the same remote hacking vulnerabilities.

Like those academic researchers, Miller and Valasek aren’t seeking to cause vehicular mayhem, so much as help to build better protections into cars before automotive hacking becomes a practical threat. Their work, they argue, shows that simply protecting vehicles from remote attacks isn’t the only layer of defense that automakers need.

Carmakers should also assume that hackers will eventually find a remote foothold and build systems that reduce the disastrous impact of any such breach. “You need to know what hackers are going to do next, how to mitigate it, and how some mitigations don’t work, which is what we’ve shown,” says Miller.

In a paper they plan to publish at the time of their Black Hat talk, Miller and Valasek recommend that automakers take more steps to prevent the kind of CAN manipulations they demonstrated. For instance, carmakers shouldn’t allow potentially dangerous diagnostic tests unless a physical switch is flipped on the car by the mechanic, they suggest.

Also, they should monitor the CAN network for signs of the kind of ECU-silencing attacks they’ve tested. Miller, Valasek and another team of vehicle security researchers have actually gone so far as to build prototypes of vehicle intrusion detection devices designed to spot anomalous traffic and warn the driver. Miller and Valasek say theirs would have caught every attack they’ve performed.

Chrysler hasn’t ignored the rising threat of car hacking. In fact, just last month it launched Detroit’s first “bug bounty” program, offering as much as $2,500 to hackers who inform the company about hackable flaws in its vehicles. Miller and Valasek’s work, which they told Chrysler about in June, doesn’t qualify for that bounty. And because these new attacks require physical access to the car, some carmakers may not consider them a real security issue.

But Miller and Valasek say it’s only a matter of time until hackers find a new method of gaining remote access to vehicles. And when they do, this is the kind of attack they’ll be able to pull off. Miller and Valasek hope the auto industry, like them, is thinking a step ahead. “We’re doing as much as we can to get manufacturers to build layers and layers of security into their cars,” says Miller. “There’s no reason to think the bug we found and got patched last year is the only bug of its kind. There are definitely more vulnerabilities in other cars, and probably more in the Jeep, too.”