With widespread adoption among law enforcement, advertisers, and even churches, face recognition has undoubtedly become one of the biggest threats to privacy out there. 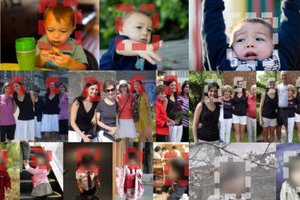 By itself, the ability to instantly identify anyone just by seeing their face already creates massive power imbalances, with serious implications for free speech and political protest.

But more recently, researchers have demonstrated that even when faces are blurred or otherwise obscured, algorithms can be trained to identify people by matching previously-observed patterns around their head and body. In a new paper uploaded to the ArXiv pre-print server, researchers at the Max Planck Institute in Saarbrücken, Germany demonstrate a method of identifying individuals even when most of their photos are un-tagged or obscured. The researchers' system, which they call the “Faceless Recognition System,” trains a neural network on a set of photos containing both obscured and visible faces, then uses that knowledge to predict the identity of obscured faces by looking for similarities in the area around a person's head and body.

The accuracy of the system varies depending on how many visible faces are available in the photo set. Even when there are only 1.25 instances of the individual's fully-visible face, the system can identify an obscured faced with 69.6 percent accuracy; if there are 10 instances of an individual's visible face, it increases to as high as 91.5 percent. In other words, even if you made sure to obscure your face in most of your Instagram photos, the system would have a decent chance identifying you as long as there are one or two where your face is fully visible.

It turns out this becomes a lot harder to do using sets of photos from “across events,” or when factors like illumination and the person's clothing have changed. The researchers found that when identifying faces obscured by black squares across events, the system's performance drops dramatically from 47.4 percent to 14.7 percent—but even that is three times more accurate than the “naive” method of identifying obscured faces through blind prediction, the researchers note.

In the past, Facebook has shown its face recognition algorithms can predict the identity of users when they obscure their face with 83% accuracy, using cues such as their stance and body type. But the researchers say their system is the first to do so using a trainable system that uses a full range of body cues surrounding blurred and blacked-out faces.

“From a privacy perspective, the results presented here should raise concern,” the researchers write. “It is very probable that undisclosed systems similar to the ones described here already operate online. We believe it is the responsibility of the computer vision community to quantify, and disseminate the privacy implications of the images users share online.”