Web giant Yahoo has filed a patent application for the ultimate ad-targeting system: a billboard that uses sensors to watch, listen and capture biometric data from the passing public. 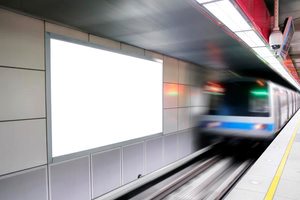 Yahoo, still in damage control from this week's claims that it helped the government spy on its email users, has filed a patent for smart technology that brings online ad-targeting capabilities to public billboards.

The billboards would have cameras, microphones, motion-proximity sensors, and biometric sensors, such as fingerprint or retinal scanning, or facial recognition, according to the patent, which was filed last year but published on Thursday. The sensors would be used to measure engagement of passers-by. "For example, image data or motion-proximity sensor data may be processed to determine whether any members of the audience paused or slowed down near the advertising content, from which it may be inferred that the pause or slowing was in response to the advertising content (eg, a measurement of 'dwell time')," Yahoo writes.

It could also use image or video data to determine whether any individuals looked directly at the advertising content. Alternatively, "Audio data captured by one or more microphones may be processed using speech-recognition techniques to identify keywords relating to the advertising that are spoken by members of the audience."

As Yahoo explains, the ability to personalize ads for smartphones has made mobile the most efficient place to use marketing budgets, whereas digital displays in public spaces, which still attract ad dollars, remain stuck on old technology. But instead of individualizing ads, Yahoo's idea would be to 'grouplize', where ad content is based on real-time information about a crowd of people, who could be commuters on a train platform or cars passing by a freeway billboard.

In the freeway scenario, the billboard would be placed near traffic sensors that detect the number of vehicles passing, their speed, and time of day. It might also use video to capture images of vehicles, and use image recognition to determine the maker and model of vehicles to distill demographic data.

The billboard may also use cell-tower data, mobile app location data, or image data to "identify specific individuals in the target audience, the demographic data (eg, as obtained from a marketing or user database) which can then be aggregated to represent all or a portion of the target audience". Alternatively, it could use vehicle GPS systems to identify specific vehicles and vehicle owners.

"Those of skill in the art will appreciate from the diversity of these examples the great variety of ways in which an aggregate audience profile may be determined or generated using real-time information representing the context of the electronic public advertising display and/or additional information from a wide variety of sources," Yahoo notes.

It sees potential for the system to be integrated with existing online ad exchanges, allowing advertisers to reach across devices with the same ads. It also envisages extending the online ad model of auctioning billboard space to the highest bidder, with content determined by the group's characteristics.

However, if the smart billboards did their job of "grouplizing" a group of young adult males, it might display a risqué dating site ad, Yahoo says. This approach might be acceptable to some on a phone, but dangerous on the freeway. Yahoo says it has an answer for this issue: "Any advertising content including video could, for example, be eliminated from the pool of available content or modified to remove video components."

In May, New York Senator Charles Schumer called on the Federal Trade Commission to investigate the use of 'spying billboards', which he described as popping up in cities across the country. He warned that such technology may represent a violation of privacy rights, because of the way it tracks the individual's cell phone data, and constitute a deceptive trade practice.