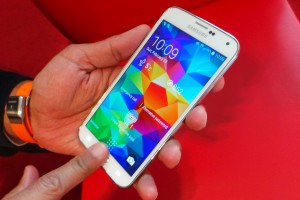 “We’re looking at  various types of biometric [mechanisms] and one of things that everybody is looking at is iris detection,”  Samsung’s senior vice president Rhee In-jong told analysts and investors at a forum in Hong Kong.

“We, as a market leader, are following the market trend,” he said, noting that new types of sensors like those used for detecting the human iris will likely be available for adoption in high-end phones first. Samsung has long been struggling to win corporate clients for its mobile devices, a challenge that the company hopes to overcome with its Knox system, to compete with rivals like Blackberry, which has traditionally been strong in the enterprise space. But so far, results haven’t been stellar.

There are  87 million devices that come embedded with Knox, Rhee said. Among those devices, about 1.8 million are actively using the Knox, including regulated industries such as banks, healthcare and financial companies, he said Monday. But that’s just a fraction of what has been distributed to the market. Rhee said that the number of clients is rising and the focus will be initially on having a wider distribution.

Samsung’s Knox system has been subject to studies for a possible security gap, adding to challenges in building a new corporate client base. The company later clarified that the potential security flaw is not specific to Samsung  devices.