Apple and Nokia are fighting about patents again

Nokia and Alcatel-Lucent have launched a major legal attack on Apple, filing lawsuits in Germany and the US that accuse Apple of infringing 32 patents. 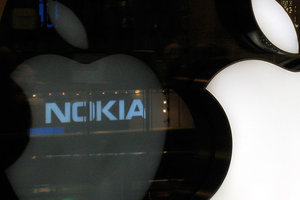 According to Nokia's statement, the patents cover technologies that include display, user interface, software, antenna, chipsets, and video coding.

The US lawsuit includes 10 patents and was filed in federal court in East Texas, a venue that's long been favored by patent owners. Most of the patents originated at Nokia, but at least one originated at Lucent Technologies. Nokia agreed to buy Alcatel Lucent in 2015 and completed the deal last year. The new lawsuit (PDF) appears to be a major revival of the patent battles Apple and Nokia fought between 2009 and 2011. Back then, the two companies were also engaged in litigation that spanned the globe.

All that was put to rest with a settlement in 2011, which analysts estimated at the time may have been worth hundreds of millions of euros to Nokia. Despite those payments, Nokia said in a statement today that Apple refused to license "other of its patented inventions which are used by many of Apple's products."

Of course, that might be because Nokia didn't offer them as part of the 2011 settlement package. Some Nokia patents were distributed to so-called "patent trolls," also called patent assertion companies or PAEs. Those PAEs include Acacia Research Corp., a branch of which won a $22.1 million verdict against Apple in June.

"Nokia has created or contributed to many of the fundamental technologies used in today's mobile devices, including Apple products," said Nokia patent chief Ilkka Rahnastoin a statement. "After several years of negotiations trying to reach agreement to cover Apple's use of these patents, we are now taking action to defend our rights. The Nokia lawsuit accuses every version of iPhone — from the iPhone 7 all the way back to the iPhone 3GS — of infringing Nokia patents. Also accused are iPad Pro and every version of iPad Air and iPad Mini, as well as the Apple Watch, Apple TV, and services like Find My iPhone and Find my iPad.

As one example, Nokia says that US Patent No. 6,701,294, which it acquired from Alcatel-Lucent, is infringed by Apple's Siri feature in iOS 10. "Apple's Siri acts as an intelligent personal assistant in conjunction with the user interface... of Apple mobile devices," the complaint states. The Siri-using products have a "translator unit," an "evaluator unit" and an "interrogator unit for querying said one or more prescribed databases," and a "supplier unit" to give information to the user. In Nokia's view, the Apple "supplier unit" consists of "the Siri program, including the Apple device, wireless connections, and backend servers."

Nokia's business has gone through dramatic ups and downs since its earlier dispute with Apple. Nokia sold its phone business to Microsoft in 2014. But Microsoft struggled and ultimately exited the smartphone sector anyway earlier this year, taking a final write-down on the $7.1 billion Nokia purchase and laying off up to 1,850 workers.

Earlier this month, Nokia announced plans to get back into the smartphone business with Android-powered phones that will be on the market next year.  Just yesterday, Apple filed an antitrust lawsuit (PDF) against Nokia in federal court in San Jose. In it, Apple accused the Finnish company of transferring "massive numbers of patents" to patent assertion companies like Acacia.

Nokia reached a deal with "each of its PAE co-conspirators" to separately enforce a diffused patent portfolio, "to maximize the aggregate royalties that can be extracted from product companies," Apple lawyers allege. "Nokia and those PAEs have thereby increased market power and created or enhanced monopoly power associated with those patents."

Apple claims that Nokia's strategy of working with PAEs to stack up big royalty payments is a violation of US antitrust laws, as well as a breach of contract. The breach of contract claim says that Nokia violated its commitments to license certain standard-essential patents on a FRAND (fair, reasonable, and non-discriminatory) basis.