Cybercriminals do stuff online, so punish them by taking away their internet access. It’s as simple as taking a crowbar from a burglar. Or is it? 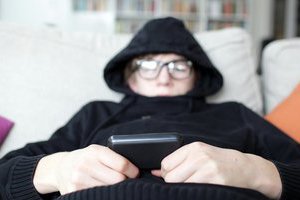 Some outside-the-box thinking by a top cop this week has triggered a debate among cybersecurity types about young offending and punishment.

Ch Supt Gavin Thomas, the president of the Police Superintendents’ Association of England and Wales, suggested in an interview that Wi-Fi jammers – devices worn on the ankle or wrist to block the internet – could serve as a smarter punishment for cybercrimes than prison. “We have got to stop using 19th-century punishments to deal with 21st-century crimes,” he said. Few would dispute that, but there are some issues with jammers. First, they are illegal under the Wireless Telegraphy Act 2006, so we’d need to work on that. Second, they wouldn’t work.

“Although we desperately need alternatives to prison, using Wi-Fi jammers is both technically infeasible and unreliable,” says Cal Leeming, who went to prison for hacking as a teenager and is now a security consultant. “Even if you did manage to implement it without breaking nearby connectivity, which in itself would be very difficult because of how radio works, it could be easily circumvented by using a cable.”

Darren Martyn, an Irish convicted hacker turned security researcher (he was part of the LulzSec group), adds: “This would cause huge disruption to anyone within jamming range of the ‘tagged’ person.” Legal and technical hurdles notwithstanding, would an enforced screen break – a digital grounding of the sort increasingly issued by parents – help solve the broader problem?

Prof Mary Aiken, a cyber-psychologist at University College Dublin, is sceptical. If the criminal justice system is struggling to keep pace with tech, the lag in education is the graver threat, she says. “It is going to be very difficult if not impossible to prosecute our way out of problems such as youth hacking,” she explains. “What is required is a fundamental re-evaluation of the impact of technology on developing youth.”

In Youth Pathways into Cybercrime (pdf), a report published in October by Middlesex University, Aiken and her colleagues recommend not thwarting the digital skills of these young people, but giving them safer outlets. Jessica Barker, a cybersecurity consultant who runs the cyber.uk website, agrees. She cites research by Sonia Livingstone, who leads the Parenting for a Digital Future research project at the London School of Economics. It suggests that denying screen time or web access can be counterproductive, whether we’re talking about naughty kids or young criminals. “Children who are blocked access are more likely to engage in risky behaviour because they will find another way to access the internet that is unsupervised,” Barker says.