Deutsche Bank AG has banned text messages and communication apps such as WhatsApp on company-issued phones in an effort to improve compliance standards. 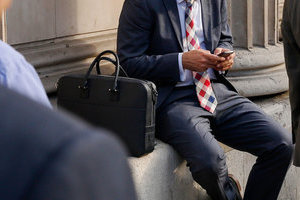 The functionality will be switched off this quarter, chief regulatory officer Sylvie Matherat and chief operating officer Kim Hammonds told staff in a memo on Friday. Unlike e-mails, text messages can’t be archived by the bank, said a person with knowledge of the matter who asked not to be identified discussing internal matters.

“We fully understand that the deactivation will change your day-to-day work and we regret any inconvenience this may cause,” Matherat and Hammonds said in the memo. “However, this step is necessary to ensure Deutsche Bank continues to comply with regulatory and legal requirements.” The policy also applies to private phones used by employees for work purposes. Communication apps such as WhatsApp, Google Talk, iMessage are also prohibited, the memo said.

Deutsche Bank is working to improve compliance and clean up a reputation dented by a series of probes into its role in the sale of toxic debt, manipulation of interest-rate benchmarks and failure to prevent possible money laundering in Russia. Chief Executive Officer John Cryan, who has made changing the culture at the bank a key pillar of his revamp, last month reached a $7.2 billion agreement in principle with the Department of Justice to settle an investigation into the bank’s sales of mortgage securities before the financial crisis.

Deutsche Bank has been slapped with more than $13.9 billion in fines and legal settlements since the start of 2008. That includes a $3.1 billion penalty it agreed to pay in the preliminary settlement with the DOJ. It doesn’t include $4.1 billion in relief to borrowers that the bank agreed to provide over at least five years.

In July 2012, the bank accidentally destroyed 482 tapes of telephone calls that were among recordings the U.K. Financial Conduct Authority had ordered the company to preserve, according to the regulator. The bank’s foot-dragging and evasions increased the fine it paid to the FCA by 101 million pounds ($122 million) to a total of 227 million pounds, the FCA said in April 2015.

The U.K.’s Financial Services Authority adopted rules in 2010 that force banks to record and store traders’ mobile-phone calls for six months. One investment bank told the FSA that it would cost 500,000 pounds to monitor the calls of 50 users. Deutsche Bank spokesman Tim-Oliver Ambrosius confirmed the decision and declined to comment further. Earlier a security vulnerability that can be used to allow Facebook and others to intercept and read encrypted messages was found within its WhatsApp messaging service. It should be mentioned that earlier found WhatsApp vulnerability allows snooping on encrypted messages.