Google uses its search engine to hawk its products

Alphabet Inc.’s Google runs the world’s largest advertising business, selling space atop its search results. Google is also among the biggest buyers of those ads, promoting products from its music service to its app store. 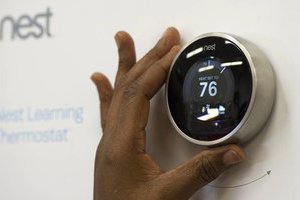 These days, Google often pushes its growing list of hardware products, from Pixel phones to Nest smart thermostats, in the top ad spot above its search results.

An analysis found that ads for products sold by Google and its sister companies appeared in the most prominent spot in 91% of 25,000 recent searches related to such items. In 43% of the searches, the top two ads both were for Google-related products. The analysis, run by search-ad-data firm SEMrush, examined 1,000 searches each on 25 terms, from “laptops” to “speakers” to “carbon monoxide detectors.” SEMrush ran the searches Dec. 1 on a desktop computer, blocking past web-surfing history that could influence results.

The results show how Google uses its dominant search engine to boost other parts of its business and give it an edge over competitors, which include some of its biggest advertising customers. A Google spokesman said the company has “consciously and carefully designed” its marketing programs not to affect other advertisers.

The analysis highlights a rarely discussed apparent conflict of interest in the $187 billion digital-advertising industry: The leading sellers of online ad space, including Google, Facebook Inc. and Microsoft Corp., also compete with their customers for that space.

Google searches for “phones” virtually always began with three consecutive ads for Google’s Pixel phones. All 1,000 searches for “laptops” started with a Chromebook ad. “Watches” began with an Android smartwatch ad 98% of the time. And “smoke detector” led with back-to-back ads for internet-connected alarms made by Nest, a company owned by Google parent Alphabet. In all instances, the stores these ads pointed to were also owned by Alphabet.

After experts shared the analysis with Google on Dec. 15, many of the ads disappeared, including nearly all from Google’s online store. A second analysis on Dec. 22 showed Google or Nest ads in the top spot on 19% of the searches. Google declined to comment on the disparity. Google’s practice of promoting its other products and services on its search engine has drawn regulatory scrutiny. The company is facing charges from the European Union’s antitrust regulator that it favors its comparison-shopping service over rivals in its search results—charges that Google disputes.

Television stations and newspapers have long used so-called house ads to market their own products, but they generally charge set prices—instead of auctioning the spots—and often advertise in unused space. Internet giants sell ads via auctions, meaning they bid against their customers, potentially affecting the prices other advertisers pay.

Google runs auctions for each appropriate search result, or millions a minute. Marketers choose bid prices and terms they want to advertise on. Google determines ad placements and prices based on a secret algorithm that weighs bids and Google’s assessment of an ad’s relevance and quality, calculated partly by its past click rate and landing page.

Google said that when it competes for ads, other advertisers are charged as if it wasn’t bidding, meaning its participation doesn’t directly inflate prices. That is one of a series of house-ad rules set by an internal Google committee designed to minimize conflict. Google said that its ads only appear atop results because of the ad’s quality and the price Google is willing to pay. Google said its house ads are also subject to marketing budgets.

While Google pays itself for the ads, the strategy does have a cost: Google forgoes potential revenue from ads it displaces. Online-marketing executives and analysts say Google’s ads can still affect the price, placement and performance of its customers’ ads. Advertising slots on many pages are limited, so Google’s ads can prompt others to increase their bids to compete for the remaining slots.

“It’s definitely problematic,” said AJ Kohn, head of a small search-marketing firm called Blind Five Year Old. “You have to take Google’s word for it.” In the Journal analysis, Google ads most frequently ranked above the ads of Best Buy Co. The electronics retailer said it values “Google’s search capabilities to market our products and services.” Google is the dominant player in online advertising, capturing 31% of digital ad revenue last year, according to research firm eMarketer. 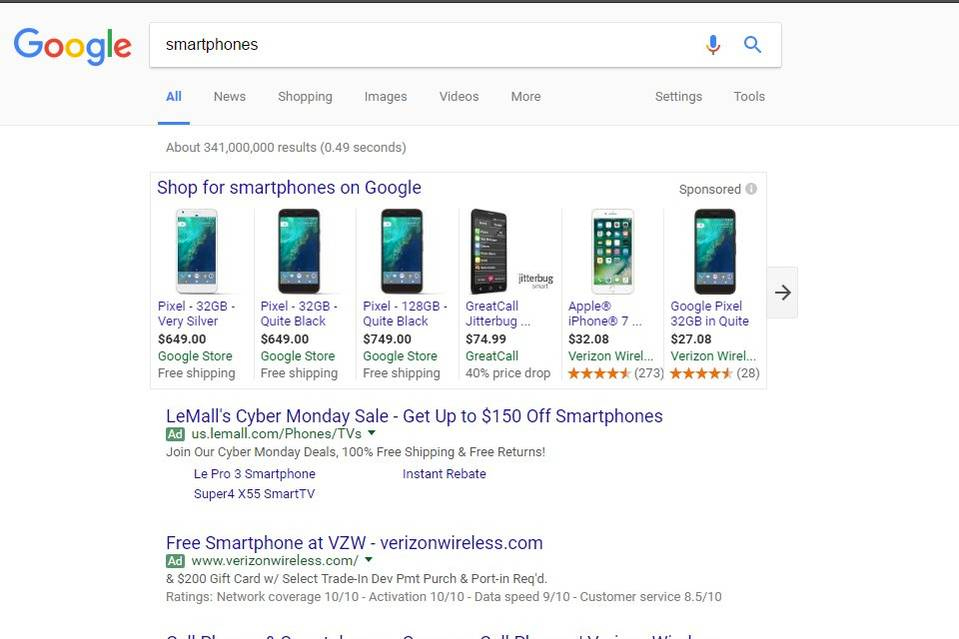 Facebook, the second-largest seller of online ads, said it bids for space on its sites “like any other advertiser.” Facebook promotes its own products in news feeds of its users, including a recent campaign for its Instagram photo-sharing app, for which it budgeted tens of millions of dollars, according to a person familiar with the matter. Likewise, Microsoft said it bids “on a level playing field” against its customers for ads on its Bing search engine.

In the year ended in May 2016, SEMrush said Google bid on roughly 2.7 million search terms a month, second only to Amazon.com Inc.’s 3.7 million terms. Target Corp. was the only other company that bid on more than one million terms a month on average. 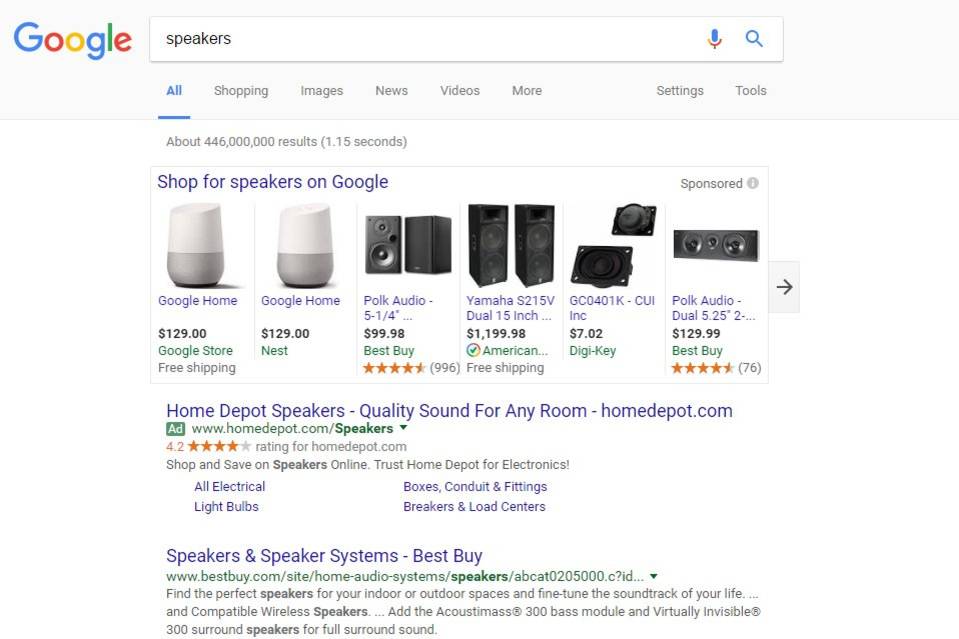 Russian software firm Bitrix Inc. said Google house ads made its ads less visible and more expensive. In January 2015, Bitrix ads appeared next to 24% of searches related to customer-relationship-management software, making it the most prevalent advertiser on that term, according to data Google supplied to Bitrix and seen by the Journal. At the time, Google wasn’t advertising on that term. 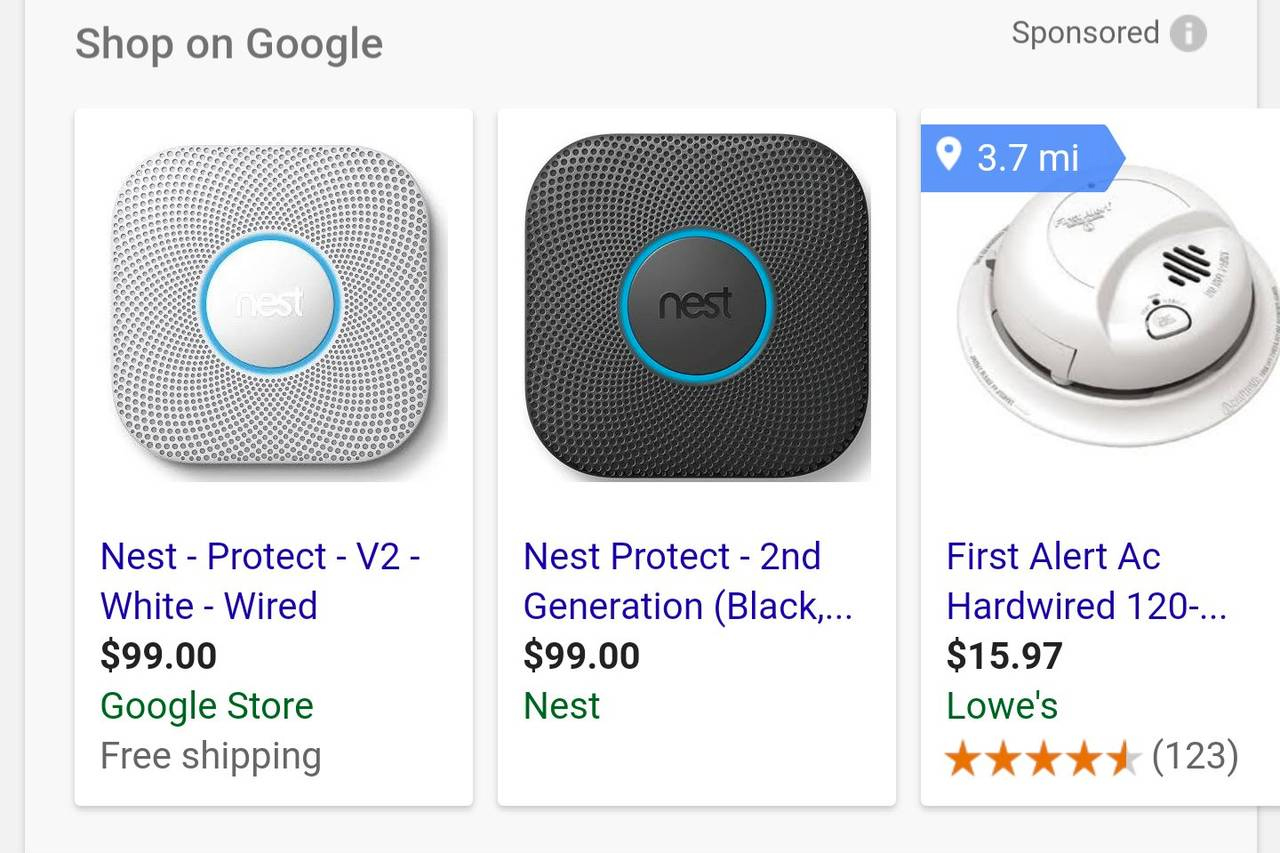 By August 2016, Google ads appeared in more than 70% of CRM searches, making it the most frequent advertiser on those terms, according to the data. Bitrix’s ads appeared with 14% of searches, even though it paid Google 26% more for those ads than it did in January 2015. The Google spokesman said competition from other advertisers—not Google—prompted the changes in Bitrix’s ad placements and rates.

Ads from CRM-software sellers like Salesforce.com Inc. and Microsoft appeared more often than Bitrix’s ads last August, but Google had by far the biggest spike in visibility over the period. Google doesn’t actually make CRM software; the ads were for its cloud service, which can be used to launch CRM tools. The Google spokesman said its ads were relevant to the search.