Donald Trump's phone use is raising security concerns among a pair of senate Democrats. 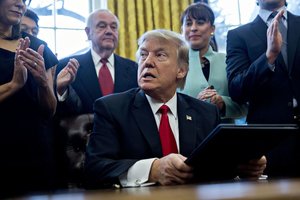 Sens. Tom Carper and Claire McCaskill sent a letter last week to Secretary of Defense James Mattis about whether the president is using a secure device to make calls and post tweets.

The senators, who both service on the Homeland Security Committee, worry that an unsecured device could be vulnerable to hacking, posing a national security risk. "Public reports originally indicated that President Trump began using a 'secure, encrypted device approved by the U.S. Secret Service' prior to taking office," the senators wrote in the letter, which was made public Monday. Subsequent reports, however, suggest that President Trump may still be using his personal smartphone, an 'old, unsecured Android phone.'

"While it is important for the President to have the ability to communicate electronically, it is equally important that he does so in a manner that is secure and that ensures the preservation of presidential records," the senators wrote. The Secret Service issued Trump a secured phone for his inauguration, but the president has since reportedly used an unsecured Android phone to tweet from the White House while watching television. Trump's use of an unsecured phone comes after an election filled with hacks of the personal communications of Democratic political figures and organizations. Individual phones are easy to hack for anyone motivated enough, security experts say. The White House was contacted for comment but did not immediately respond.