Viviane Reding calls for a data protection compact for Europe

On Data Protection day 2014, Vice-President Reding called for a "data protection compact for Europe" - eight principles that should govern the way data is processed by the public and the private sector. 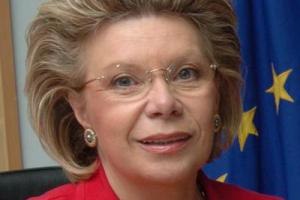 Two years after the European Commission proposed a major reform of the EU’s data protection rules, Vice-President Reding called for full speed on data protection in 2014, saying "Europe must act decisively to establish a robust data protection framework that can be the gold standard for the world.

Otherwise others will move first and impose their standards on us." Speaking about national security programmes and their implications for data protection, Vice-President Reding said it is essential that Europe get its own house in order.

"National security should be invoked sparingly. It should be the exception, rather than the rule," said Reding, citing the Tempora Programme in the UK as an example.

In the wake of President Obama's speech, in which he announced plans to give non-U.S. citizens who do not live in the U.S. rights and protection when their data is being processed across the Atlantic, Vice-President Reding said: "This is a window of opportunity. We need to turn opportunities into enforceable rights".

Already in November 2013, the European Commission set out the actions that need to be taken in order to restore trust in data flows between the EU and the U.S. On social media, European Commission experts are answering questions about data protection in a live Twitter chat from 12.00 to 13.30 CET. Follow the chat using the #EUdataP and #EUchat hashtags.