A partnership between the secret-spilling group and Google, Microsoft, and Apple has already hit its first road block. 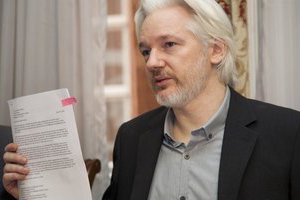 Last week, WikiLeaks promised it would share the technical details and code of the hacking tools that the CIA has allegedly developed against Google, Apple, Microsoft and other tech companies. This week, after days of waiting, the secret-spilling site finally made initial contact with the companies.

But WikiLeaks founder Julian Assange's attempt to help these major tech companies find out exactly what bugs and vulnerabilities the CIA is or was allegedly taking advantage of, and then plug the holes, is not going very smoothly for now. And WikiLeaks has not shared any data with them yet. "Beyond making the initial contact, no information has been shared," a source familiar with the matter told. This week, Assange sent an email to Apple, Google, Microsoft and all the companies mentioned in the documents.

But instead of reporting the bugs or exploits found in the leaked CIA documents it has in its possession, WikiLeaks made demands, according to multiple sources familiar with the matter who spoke on condition of anonymity. WikiLeaks included a document in the email, requesting the companies to sign off on a series of conditions before being able to receive the actual technical details to deploy patches, according to sources. It's unclear what the conditions are, but a source mentioned a 90-day disclosure deadline, which would compel companies to commit to issuing a patch within three months.

The companies, however, are not sure what to do next because the vulnerabilities come from highly-classified documents (which may have been illegally obtained), as well as the suspicion that, perhaps, these documents and hacking tools were leaked to WikiLeaks by the Russian government.

The CIA, for now, has apparently made no contact with the tech companies to disclose the vulnerabilities itself. In theory, since WikiLeaks has the documents, the CIA could assume the hacking tools are burned anyway, and disclose them to the tech companies in the event that criminal hackers or other adversaries figure them out. That isn't just a theoretical risk. Last summer, when the mysterious group Shadow Brokers dumped the code of NSA hacking tools, criminals quickly repurposed it.

WikiLeaks for now hasn't published any code that would let people take advantage of those bugs—though some hacking code did leak. "WikiLeaks and the government hold all the cards here, there's not much the tech companies can do on their own besides rabidly looking through their code to look for any issues that might be related," a source told me.

Other sources who work at two different tech companies confirmed that the matter is essentially stuck at their respective legal departments. The security teams are still waiting, according to sources. "WikiLeaks has made initial contact with us via secure@microsoft.com," a Microsoft spokesperson told in an email. Google and Apple did not respond to a request for comment. WikiLeaks also did not respond requests for comment.

The organization is known for imposing uncompromising demands on companies it works with. In 2011, Assange enraged a series of newspapers with its demands, even after they had already started collaborating. Assange also has a well known contempt for companies such as Google. So this process might hit a few more roadblocks. The CIA, on its part, declined to comment on whether it plans to alert the tech companies. Instead, a spokesperson sent a statement saying that the agency has "no comment on the authenticity of purported intelligence documents released by Wikileaks or on the status of any investigation into the source of the documents."

"As we've said previously, Julian Assange is not exactly a bastion of truth and integrity," the spokesperson wrote. "The American public should be deeply troubled by any Wikileaks disclosure designed to damage the Intelligence Community's ability to protect America against terrorists and other adversaries. Such disclosures not only jeopardize US personnel and operations, but also equip our adversaries with tools and information to do us harm."