Hacks and Highlights of the Chaos Communication Congress

The Chaos Computer Congress is the largest offline hacker gathering in Europe. Over 9000 people came to Hamburg between Christmas and New Years Eve to attend talks, discuss, meet up with like-minded folk, hack, make and rejoice in the abundance of LEDs. 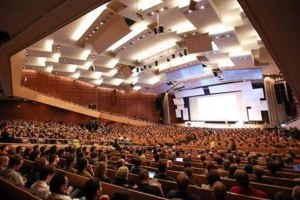 It being a hacker conference there was a high DIY level. The congress was organized and run by volunteers called Angels, self-organized sessions outnumbered the talks of the main program and groups organized in Assemblies to create a home base in the sea of people.

The Congress Center Hamburg building was completely pimped, its CCH logo hacked to read CCC, a temporary night club was built up on the ground floor (with working water canon!) and the congress’ rocket logo came to life in front of the entrance.

CCC is known for its powerful combination of high quality technical talks and attention for the political dimension of technology. Here are some of the highlights of the 30th edition of CCC a.k.a. 30C3

To protect and infect part 2

Scheduled on the last day of the conference, the talk of security researcher Jacob Appelbaum sent many 30C3-goers home shaken. Even after six months of NSA revelations the shock amongst the technophiles was palpable after Appelbaum disclosed how the NSA has infiltrated and subverted many of the hardware devices that form the physical foundation of the global network.

Vienna and other Austrian cities have centralized key systems to open up gates, bars and parking spaces. Keys are made available to a wide variety of agencies in need of access like garbage collectors and emergency services. These keys used to be mechanical but are increasingly replaced by RFID systems. Adrian Dabrowski shows how he was able to hack the RFID system with inexpensive tools and unlock thousands of locks in the city.

Felix Domke hacked the computer in his car to run his own Python code. He gives a detailed and funny talk about how he did it and what the benefits are.

Piotr Esden-Tempski presents a history of civilian drones showing the amazing feats that have been accomplished in a field only ten years young. He ends with an outlook on the future listing the technological improvements needed to bring DIY drones to the next level.

Facial hacker Arthur Elsenaar explores the relationship between electricity and the human body. In this performance a computer controls his facial expressions using electric currents. The result is a display of expressions no human brain could achieve.

How to Build a Mind – Artificial Intelligence Reloaded

Joscha Bach examines several theories of mind from both the fields of philosophy and artificial intelligence. He concludes the mind is a computational machine. Therefore building an human-equivalent AI is possible and a matter of incremental improvements to existing technology.

Since CCC has famously organized all of its 30 congresses without external financial sponsoring it was clear the performance was a hoax. A stab at other hacker conferences giving up their independence in exchange corporate sponsoring such as the 2013 Dutch outdoor festival OHM which stirred up much controversy after accepting private security firm Fox-It as its main sponsor.

CCC traditionally ends with an overview in statistics. Here are some: There were over 9000 participants making 30C3 the most visited CCC congress in history. More than a 1000 Angels made it all possible. There were 178 speakers in the main track, 154 assemblies and 250 self-organized sessions although there may have been more since not all are registered.

30C3 offered several networks to connect: a DECT system for free phone calls inside the congress. A 100Gigabit Ethernet connection made available through thousands of ports deployed throughout the massive CCH congress building. Open and encrypted wireless services, a GSM network and a Seidenstrasse (Silk Road): a pneumatic tube system to send messages in plastic bottles powered by vacuum cleaners.