Samsung just recently took the wraps off its latest flagship, the Galaxy S8. 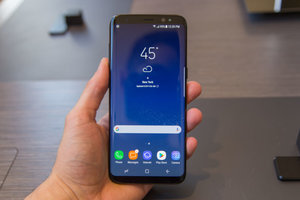 In addition to the super-slim bezels, tall screen, and speedy new Snapdragon 835 (or Exynos 9) processor, the device is also coming with a ton of biometric authentication options. You get a fingerprint reader, iris recognition, and face recognition.

With the public's first exposure to the Galaxy S8 happening a few days ago, it was only a matter of time until one of these biometric solutions had some holes poked in it. One of those holes is that Galaxy S8's face recognition can be tricked with a photo. At least this is what a video from Spanish Periscope user Marcianophone purports. About six minutes into the 40-minute Spanish-language video, you can see the attendee take a selfie with his personal phone, then point it at the Galaxy S8, which is trained to unlock with his face.

It only takes a few minutes of fiddling before the Galaxy S8 gives in and unlocks with just a picture, moving from the "secure" lock screen right to the home screen. Once the user dials in his technique, he shows the trick is easily repeatable.

Google added a "Face Unlock" system to Android 4.0 back in 2011, and it had the same picture vulnerability that Samsung's solution has today. In Android 4.1, Google's face unlock added a "liveness check" that attempted to defeat the photo vulnerability by requiring the user to blink. This too was bypassed (rather hilariously) by grabbing a photo of someone, poorly Photoshopping a second copy of the picture with a set of closed "eyelids," and then switching between the "eyes open" and "eyes closed" pictures when the face unlock asks the user to blink. It seems Samsung built a face unlock feature from the ground up for the S8, and it's repeating the same mistakes.

Samsung seems to know face unlock is not the most secure feature on Earth. It's the only one of the three biometric systems that can't be used to authorize Samsung Pay purchases. We'd suggest that's it's also not a great idea to set as your lock screen, and a PIN or password would be more secure. The good news for Samsung is that the Galaxy S8 isn't out yet, so it has some time to fix face unlock's flaws before the April 21st release date.

A Samsung spokesperson provided the following comment: "The Galaxy S8 provides various levels of biometric authentication, with the highest level of authentication from the iris scanner and fingerprint reader. In addition, the Galaxy S8 provides users with multiple options to unlock their phones through both biometric security options, and convenient options such as swipe and facial recognition. It is important to reiterate that facial recognition, while convenient, can only be used for opening your Galaxy S8 and currently cannot be used to authenticate access to Samsung Pay or Secure Folder."