The sheer dominance of Google's Android operating system in the mobile market also comes with a flipside. 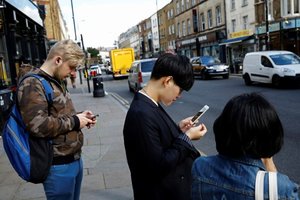 Due to the increasing number of people using the OS on their smartphones and tablets, it has become the most preferred choice for hackers attacking the platform with malware. According to a new report from German software company G DATA, its security researchers discovered over 750,000 new Android malware apps in the first quarter of 2017.

On an average, the number equates to nearly 8,400 new malware instances every day. The company, which specialises in security software solutions, said that the year 2017 was off to a slower start in comparison with the same period last year, in terms of new malware discoveries. However, the threat level for Android users still remains high, with around 3.5 million new Android malware apps are expected to be created in 2017.

While security vulnerabilities in the Android platform are nothing unusual, low distribution of Android 7 makes it more difficult to shield the OS from malicious software. "The problem is that third party providers do not adapt the new operating system for older devices ("older" in this case meaning one year or more). Sometimes, newer operating system updates are not published at all. Hence, in many cases it can take a long time before any updates are provided. That is, if they are provided at all," the report said. 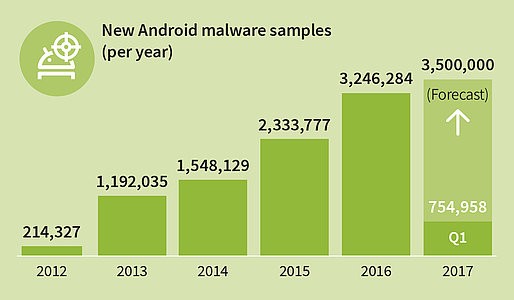 The G DATA report essentially underlines the significance of frequent security updates that OEMs need to roll out to their customers. For Google, it's even more important remain vigilant with Android accounting for the majority of the mobile OS market share. According to Gartner, Android powered over 352 million smartphones in the fourth quarter of 2016, accounting for nearly 82 percent of the market share.

While Android is often criticised for being slow to protect users from vulnerabilities, Google has gotten serious over the years to make its mobile OS secure. But, there is still a lot of work to do. Android security leads Adrian Ludwig and Melinda Miller wrote in a year-in-review post in March that over 735 million devices from more than 200 manufacturers received security updates in 2016, these patches still didn't reach about half of Android users. "There's still a lot of room for improvement, however. About half of devices in use at the end of 2016 had not received a platform security update in the previous year," the duo said.