Internal Apple presentation on how to handle leaks gets leaked 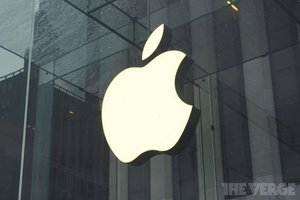 The presentation, held for about 100 people, was led by three members of Apple’s Global Security division: director of global security David Rice, director of worldwide investigations Lee Freedman, and Jenny Hubbert, from the Global Security communications and training team.

The audio describes the lengths Apple goes to in order to keep information about new products out of the hands of leakers, competitors, and the press. The Global Security team tasked with this includes previous members from the NSA, the US military, the FBI, and the US Secret Service. Rice speaks about the various ways workers try to steal parts, including flushing them down a toilet to collect later in a sewer and throwing them over fences. In one of the more outlandish schemes, Rice says, “We had 8,000 enclosures stolen a long time ago by women putting it in the underwire of their bra.”

The workers are tempted by payments that can exceed what they make in several months. Rice says they’ve seen cases where up to a year’s salary has been offered in reward for stealing parts. According to a 2016 report from China Labor Watch, Apple workers on the production line make about $350 USD a month.

The most valuable thing to steal is usually the device’s housing or enclosure, which often ends up in Shenzhen’s electronics market. Rice says in 2013 Apple had to buy back 29,000 total enclosures ahead of the iPhone 5C announcement in order to “keep it out of every blog on Earth.”

These are now severe exceptions, according to Rice, something he notes as an exceptional accomplishment given the company screens upwards of 3 million people a day coming in and out of their overseas factories. In 2016, Rice says Apple produced 65 million housings, with only four stolen: a one in 16 million loss ratio.

According to the report, the overseas leaks have been handled so successfully that now Apple is turning the focus on their own campuses in California. “Last year was the first year that Apple [campuses] leaked more than the supply chain,” Rice says in the audio. “More stuff came out of Apple [campuses] last year than all of our supply chain combined.”

Two US leakers mentioned include one who worked at Apple’s online store, and another who worked on iTunes. Both were providing information to blogs, and though their motivations were not mentioned, Rice says of US leakers, “We oftentimes get people who are really excited about our products and they end up finding something to share and they will go out and say, ‘Hey, guess what we did.' Or somebody will ask them a question and instead of just saying, ‘I can't talk about it,’ they will say too much.”

Though Apple’s Global Security team says it has been able to slow the occurrence of leaks, they still happen. In April, an unverified schematic of the iPhone 8 leaked, and this month, leaks were provided by three alleged Foxconn employees ahead of WWDC with details on products like the HomePod.