Apple Inc. is working on a feature that will let you unlock your iPhone using your face instead of a fingerprint. 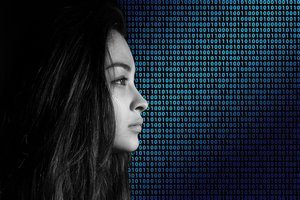 For its redesigned iPhone, set to go on sale later this year, Apple is testing an improved security system that allows users to log in, authenticate payments, and launch secure apps by scanning their face, according to people familiar with the product.

This is powered by a new 3-D sensor, added the people, who asked not to be identified discussing technology that’s still in development. The company is also testing eye scanning to augment the system, one of the people said. The sensor’s speed and accuracy are focal points of the feature. It can scan a user’s face and unlock the iPhone within a few hundred milliseconds, the person said. It is designed to work even if the device is laying flat on a table, rather than just close up to the face.

The feature is still being tested and may not appear with the new device. However, the intent is for it to replace the Touch ID fingerprint scanner. An Apple spokesman declined to comment. In testing, the face unlock feature takes in more data points than a fingerprint scan, making it more secure than the Touch ID system, the person said. Apple introduced Touch ID in 2013 with the iPhone 5s for unlocking the phone and it added support for authenticating payments and logging into apps a year later.

Apple is not the first to use different forms of biometric authentication. In its latest phones, Samsung included iris scanners that let users unlock their phones and make payments by scanning their eyes. Samsung’s feature on its Galaxy S8 smartphone launched to poor reviews as users were able to trick the sensor with printed photo copies of a person’s eyes. Apple’s sensor has 3-D depth perception, which means the system is less likely to be duped by 2-D pictures. Analysts at JPMorgan Chase & Co. and other firms said earlier this year that a 3-D sensor would likely be included in the next iPhone.

The new iPhone’s debut this fall will mark the biggest upgrade in years to the company’s most important product. Apple launched the iPhone 7 and iPhone 7 Plus last fall, focusing on camera and speed upgrades while using the same design as the previous iPhone 6s (which essentially added a pressure-sensitive screen to the 2014 iPhone 6’s design). The iPhone generates nearly two-thirds of Apple’s sales, and has become a central hub for products like the Apple Watch, Apple TV, and the new HomePod.

In addition to the face unlock feature, Apple is testing next-generation iPhone prototypes that include a dedicated chip for processing artificial intelligence tasks and screens that can display content at a higher frame rate. The AI chip is internally called the Apple Neural Engine and would improve battery life by handling tasks like image recognition and typing suggestions. The faster screens in testing are the same as the ProMotion displays in Apple’s latest iPad tablets, one of the people said.

For the device’s decade anniversary, Apple is also testing a new glass casing, steel edges, and a larger display that fits into a smaller overall body. The new phone will have glass on both the front and back that curves at the edges. Between the glass front and back is a stainless steel frame that houses power and volume controls.

The front and back glass looks continuous because of how thin the steel surrounding frame is, people familiar with the device said. The edge-to-edge display’s only break will be a cutout in the glass to fit in the earpiece, front facing camera, and facial recognition sensor, one of the people said.

The redesigned iPhone will use an OLED screen, which reproduces colors more crisply, while the company is also planning updates to the iPhone 7 and iPhone 7 Plus that still include standard LCD screens. The new 3-D sensor is being tested for the OLED version. All three phones will include faster, more efficient processors based on a 10-nanometer production process, people familiar with the products said. The non-OLED phones will be more readily available than the revamped phone at launch because of supply constraints.

The nearly all-screen front on the revamped iPhone means it will be about as big physically as the iPhone 7, but will have a display roughly the size of the one on the larger iPhone 7 Plus. The new device will have slimmer side bezels around the screen and eliminate the physical home button in favor of a virtual software-based button. Apple has faced challenges integrating the Touch ID fingerprint scanner into this new screen, people familiar with Apple’s work have said. Apple is also testing additional gestures, such as swiping across the center of the screen to launch actions, to replace the home button.

Apple is also working on new augmented reality capabilities. It’s unclear whether the new 3-D sensor will support AR features, or just focus on face and eye scanning for security and authentication. For now, Apple’s public AR work is focused on ARKit, a software platform for developers to make AR apps for iPhones.