Half of American adults hacked this year

Hackers have exposed the personal information of 110 million Americans - roughly half of the nation's adults - in the last 12 months alone. That massive number, tallied for CNNMoney by Ponemon Institute researchers, is made even more mind-boggling by the amount of hacked accounts: up to 432 million. 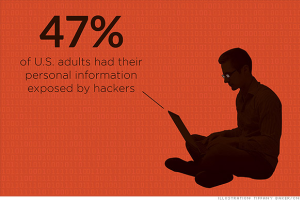 The exact number of exposed accounts is hard to pin down, because some companies -- such as AOL (AOL) and eBay (EBAY, Fortune 500) -- aren't fully transparent about the details of their cyber breaches.

It's enough to get hunted down by an abusive ex-spouse. It makes you an easier target for scams. And even if only basic information about you is stolen, that can easily be paired with stolen credit card data, empowering impostors.

Cyberattacks are growing so numerous that we're becoming numb to them. Researchers at IT company Unisys (UIS) say we're now experiencing "data-breach fatigue." Even the most recent numbers make for a dizzying list:

First, we're increasingly moving our lives online. Shopping, banking and socializing are now chiefly digital endeavors for many people. Stores rely on the Internet to conduct and process all transactions. As a result, your data is everywhere: on your phone, laptop, work PC, website servers and countless retailers' computer networks.

Second, hacks are getting more sophisticated. Offensive hacking weapons are numerous and cheap. And hackers have learned to quietly roam inside corporate networks for years before setting off any alarms.