Bitcoin is splitting in two. Now what?

Imagine logging into your checking account and seeing that you now also have a second account, stocked with an equal amount of a newly created currency. It could happen this morning to many people who hold the cryptocurrency bitcoin. 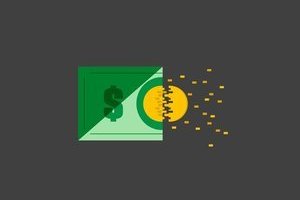 Not long after 8 am EDT, a new currency called Bitcoin Cash is due to appear, split from bitcoin in a technical maneuver called a “hard fork.” It’s the project of a group that says bitcoin’s keepers are limiting its reach by resisting change.

The creation of Bitcoin Cash is the most striking result yet of a 2-year-old feud over bitcoin’s future. Bitcoin is collectively valued at $47 billion but remains a niche product. Backers of the new currency say it’s necessary if bitcoin is to make a real mark on how the world uses money. Bitcoin Cash’s confusing origin—and name—risk making it harder for cryptocurrency to gain wider acceptance.

“Bitcoin’s an incredibly well-known brand, and to the extent it’s fracturing into various pieces, that’s confusing to regulators and consumers,” says Dan Morehead, founder and CEO of Pantera Capital, which invests in bitcoin and digital-currency startups. Morehead says he’s neutral on the dispute. “It just sounds bad; we’re not used to currencies that split into two.”

Adding to the confusion: Not everyone who holds bitcoin will get an instant stash of Bitcoin Cash today. Some leading bitcoin-storage services have said they won’t recognize the new currency, forcing people to move their business if they want to claim the new variety of cryptocoins.

Bitcoin was created by a pseudonymous coder (or coders) known as Satoshi Nakamoto, who released the software that powers the currency in 2009. It relies on a network of computers linked over the internet that collaborate to process and record all transactions in a digital ledger called the blockchain.

Computers dubbed “miners” keep the ledger updated by adding to the sequence of “blocks” that make up the blockchain as new transactions take place. Proponents say this system creates a trustworthy currency free from political oversight and capable of faster, cheaper digital transactions than possible with conventional currencies.

Acrimony among bitcoiners stems from disagreement about limits on the blockchain’s capacity baked into Nakamoto’s design, and what to do about them. The bitcoin network can only support around seven transactions per second, compared with thousands per second piped through conventional financial networks such as Visa.

Bitcoin Cash is a variation on bitcoin’s design, incorporating much bigger blocks, allowing for more transactions in a given time. Supporters say their project is necessary because planned changes that could expand bitcoin’s capacity are not sufficient. “At this point, it seems that the differences are irreconcilable and a split is unavoidable,” says Amaury Séchet, an ex-Facebook engineer who has developed code to implement Bitcoin Cash.

Owners of pre-split bitcoin will be recorded as owning cryptocoins on both blockchains. Some bitcoin exchanges—where owners transact and store cryptocurrency—have said that they will support the new currency and credit customer accounts with Bitcoin Cash when it appears. But others will not.

Bitcoin Cash’s value, and its effect on cryptocurrency’s place in the world, will be determined by how many investors and users switch from traditional bitcoin. Late Monday, one futures market pegged the value of a unit of Bitcoin Cash at about $300, roughly 1/10 the value of one Bitcoin.

The Bitcoin Cash adjustment to Nakamoto’s original creation does help address the currency’s capacity problem, says Emin Gün Sirer, an associate professor at Cornell who has studied bitcoin’s design. “The science to the extent we’ve measured it aligns with their reasoning,” he says. More important, and trickier, is whether enough people will use and invest in Bitcoin Cash to keep it going. “The crucial part is the amount of economic interest in this new currency,” Sirer says.

Support by bitcoin exchanges will enable use of Bitcoin Cash. Crucially, that could motivate more miners to put their computing power to work on maintaining Bitcoin Cash’s new blockchain, making it more reliable and stable, Sirer says. Miners are incentivized with new bitcoins for their work, and if Bitcoin Cash looks healthy, earning some early could strike miners as a good bet.

Would success for Bitcoin Cash come at the expense of the original bitcoin’s ideals? It depends on whom you ask. Defenders of the original design say too sharp an increase in capacity could raise the computer hardware requirements for contributing to the blockchain too much, opening the door to centralizing control in the hands of a few dominant players.

Some trying to build businesses on top of bitcoin are becoming frustrated by the ongoing arguments. “It really has dragged on,” says Morehead of Pantera Capital. Nobody ever said that upending the financial system would be easy.