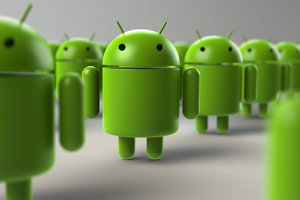 The attack, discovered by security researchers at SophosLabs, has been identified as Andr/Banker-GUA or Invisible Man —a variant of a well-known banking malware known as Svpeng that previously ran amok on Android devices.

The modified version of the trojan originally developed by Russian hackers has an additional threat that was absent in the original: a keylogger that keeps track of everything a victim types on their infected devices. This can include everything from personally identifiable information, passwords and even banking credentials. The malware makes its way onto a victim’s device by posing as a Flash update. It will appear, seemingly unprompted, with an offer to install a new version of the often maligned software that has been known to regularly invite malicious attacks.

Once on a user’s Android phone or tablet, it will check the language settings. If the device is set to Russian, the malware aborts its operation. Any other language will prompt the malware to ask for permission to use accessibility services—a giveaway that the supposed Flash update is not genuine.

If granted access to accessibility services, Invisible Man can start carrying out its attack, which includes creating an invisible overlay atop a user’s keyboard that allows the malicious software to record keystrokes entered by the user. Invisible Man will also install a compromised SMS app that replaces the default option, allowing it to intercept a victim’s communications as they type messages to friends. The real risk, though, is allowing the malware to steal vital information like login credentials and personal information.

Invisible Man will also attempt to carry out a clever scheme to trick users into surrendering their credit card information directly to the attacker. When a user attempts to open the Google Play Store app, an overlay will appear that asks for the credit card number of the card associated with a user’s account. While the menu looks genuine, it will provide the information to the attacker.

Android users—and those on just about any operating system, really—are advised to avoid Flash player at all costs. If the software is an absolute necessity, Android users can manually install the software directly from Adobe to ensure it is genuine.

Antivirus software can often catch such attacks before they get far enough along to compromise important information. Users also should remain vigilant in policing the permissions granted to apps. As previously mentioned, the ask for access to accessibility services is a giveaway that the Adobe update is potentially malicious.

Most importantly, it is recommended that users deny the ability for installation of software from unknown sources. While malware is present in the Google Play Store, the vetting process by Google captures a considerable amount more of malicious actors than would otherwise be caught in third-party marketplaces or on the open web.

To prevent installations from unknown sources, open the Settings app and navigate to Security. Find the option for Unknown Sources and make sure the box next to it not checked. This will ensure only apps downloaded from the Google Play Store can be installed on the device.