You can confuse self-driving cars by altering street signs

While car makers and regulators are mostly worried about the possibility of self-driving car hacks, University of Washington researchers are concerned about a more practical threat: defacing street signs. 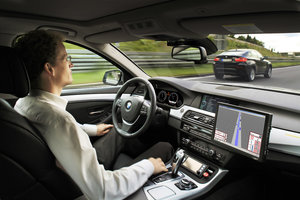 They've learned that it's relatively easy to throw off an autonomous vehicle's image recognition system by strategically using stickers to alter street signs. If attackers know how a car classifies the objects it sees (such as target photos of signs), they can generate stickers that can trick the car into believing a sign really means something else.

For instance, the "love/hate" graphics above made a computer vision algorithm believe a stop sign was really a speed limit notice. It's easy to see the potential problems. You could make these stickers using a printer at home, so anyone from dedicated attackers to pranksters could try this. It might lead to a crash the moment someone alters the sign, but it could also produce long-term chaos -- picture your city closing a road until maintenance crews can scrape the stickers off a sign.

There are ways to fight this. The research team suggests using contextual information to verify that a sign is accurate. Why would you have a stop sign on the highway, or a high speed limit on a back road? We'd add that local governments could also install signs that use an anti-stick material, or put them out of reach. Whatever happens, something will have to change if passengers are going to trust self-driving cars' sign-reading abilities.