China has demonstrated a world first by sending data over long distances using satellites which is potentially unhackable, laying the basis for next generation encryption based on so-called "quantum cryptography." 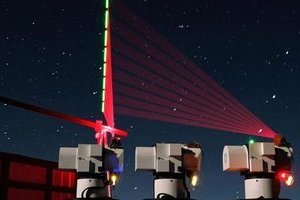 Last August, China launched a quantum satellite into space, a move which was called a "notable advance" by the Pentagon. Using this satellite, Chinese researchers at the Quantum Experiments at Space Scale (QUESS) project, were able to transmit secret messages from space to Earth at a further distance than ever before.

The technology is called quantum key distribution (QKD). Typical encryption relies on traditional mathematics and while for now it is more or less adequate and safe from hacking, the development of quantum computing threatens that. Quantum computing refers to a new era of faster and more powerful computers, and the theory goes that they would be able to break current levels of encryption. That's why China is looking to use quantum cryptography for encryption. QKD works by using photons — the particles which transmit light — to transfer data.

"QKD allows two distant users, who do not share a long secret key initially, to produce a common, random string of secret bits, called a secret key," the researchers explained in a paper. "Using the one-time pad encryption this key is proven to be secure … to encrypt (and decrypt) a message, which can then be transmitted over a standard communication channel."

State news agency Xinhua called the encryption "unbreakable" and that's mainly because of the way data is carried via the photon. A photon cannot be perfectly copied and any attempt to measure it will disturb it. This means that a person trying to intercept the data will leave a trace.

"Any eavesdropper on the quantum channel attempting to gain information of the key will inevitably introduce disturbance to the system, and can be detected by the communicating users," the researchers said. The implications could be huge for cybersecurity, making businesses safer, but also making it more difficult for governments to hack into communication.

China successfully sent the data over a distance of 1,200 kilometers from space to Earth, which is up to 20 orders of magnitudes more efficient than that expected using an optical fiber of the same length, the researchers claimed. It's also further than the current limits of a few hundred kilometers. "That, for instance, can meet the demand of making an absolute safe phone call or transmitting a large amount of bank data," Pan Jianwei, lead scientist of QUESS, told Xinhua.

The Chinese government has made the development of the space sector a key priority. For example, it has laid out plans to get to Mars by 2020 and become a major space power by 2030. And China has global ambitions for its QKD. It sees its satellite system interacting with ground-based QKD networks to create a global secure network. "We can thus envision a space-ground integrated quantum network, enabling quantum cryptography — most likely the first commercial application of quantum information — useful at a global scale," the researchers said.