IRS now has a tool to unmask bitcoin tax cheats

Cryptocurrencies were supposed to be largely anonymous. But a software tool gives the IRS has a better chance of identifying people who hide their wealth. 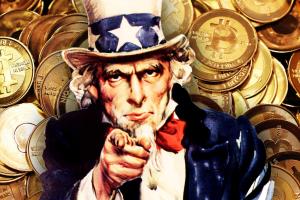 You can use bitcoin. But you can’t hide from the taxman. At least, that’s the hope of the Internal Revenue Service, which has purchased specialist software to track those using bitcoin, according to a contract obtained.

The document highlights how law enforcement isn’t only concerned with criminals accumulating bitcoin from selling drugs or hacking targets, but also those who use the currency to hide wealth or avoid paying taxes. The IRS has claimed that only 802 people declared bitcoin losses or profits in 2015; clearly fewer than the actual number of people trading the cryptocurrency—especially as more investors dip into the world of cryptocurrencies, and the value of bitcoin punches past the $4,000 mark.

Maybe lots of bitcoin traders didn't realize the government expects to collect tax on their digital earnings, or perhaps some thought they'd be able to get away with stockpiling bitcoin thanks to the perception that the cryptocurrency is largely anonymous.

“The purpose of this acquisition is… to help us trace the movement of money through the bitcoin economy,” a section of the contract reads. Experts obtained the document through the Freedom of Information Act.

The contractor in this case is Chainalysis, a startup offering its “Reactor” tool to visualize, track, and analyze bitcoin transactions. Chainalysis’ users include law enforcement agencies, banks, and regulatory entities.

The software can follow bitcoin as it moves from one wallet to another, and eventually to an exchange where the bitcoin user will likely cash out into dollars or another currency. This is the point law enforcement could issue a subpoena to the exchange and figure out who is really behind the bitcoin.

Jonathan Levin, a co-founder of Chainalysis, told in an email, “All government agencies who have traditionally needed to 'follow the money' now need to also be able to follow digital currencies.”

“This is necessary to identify and obtain evidence on individuals using bitcoin to either launder money or conceal income as part of tax fraud or other Federal crimes,” the IRS contract notes. The document also mentions the IRS’ use of World Check, a database on companies, organizations and businesses designed to provide insight into financial crime and who might be behind it. (World Check does have issues though, including sometimes using Wikipedia as a source).

Public records show the IRS has paid Chainalysis over $88,700 since 2015 for its services. Of course, just because the IRS has an easier time of tracing bitcoin today doesn’t mean that criminals won’t adapt.

“Those who are actively seeking to avoid tax, especially large amounts of tax, will move onto the next cryptocurrency that is not susceptible to the current tracking tools,” Alan Woodward, a computer science professor at the University of Surrey with a focus on cybercrime and cryptography told. Some criminals already use alternatives such as Zcash or Monero, both of which provide more privacy features over bitcoin.

The IRS acknowledged a request for comment but did not provide a response. The IRS has approached bitcoin tax evasion in some more controversial ways in the past. In a legal order filed last November the IRS demanded the identities of all US users of the bitcoin exchange Coinbase over a three year period. The case is ongoing.