The nation’s top law enforcement leader and top spy on Monday urged Senate and House leadership to permanently renew a widely used but controversial U.S. surveillance law scheduled to sunset at the end of the year. 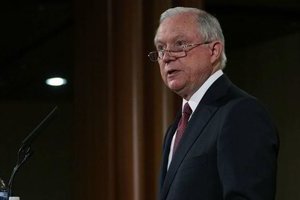 “Reauthorizing this critical authority is the top legislative priority of the Department of Justice and the Intelligence Community,” Attorney General Jeff Sessions and National Intelligence Director Dan Coats wrote in a Sept. 7 letter to both Republican and Democratic leaders.

The law — known as Section 702 of a 2008 package of amendments to the Foreign Intelligence Surveillance Act (FISA) —  is aimed at collecting data on foreign spies, terrorists and other targets. But Americans’ information can be “incidentally” caught up in the collection, and intelligence officials are allowed to search through and use that data without a warrant. Civil liberties advocates have long pushed for Congress to close the so-called “backdoor search loophole.”

That position has recently gained more traction in Congress, after several years of disappointment for reform advocates. House lawmakers in 2016 voted down language that would have closed the “loophole,” while identical provisions tacked on to an annual funding bill sailed through the House in 2015 and 2014, but were stripped out before the bill reached then-President Obama’s desk.

The Trump administration — including Coats — has been pushing for Section 702 to become permanent in its current form for months. Homeland Security adviser Tom Bossert has pushed back on the characterization of the law as permitting "backdoor" targeting of Americans. "National security officials may use search terms or identifiers associated with Americans, such as an email address, to query the information lawfully acquired using Section 702 authority," he wrote in a June op-ed.

"But this does not entail the collection or search of any new information, and the practice has been upheld by the FISA court and all other federal courts that have considered this issue," he continued. "Imposing a warrant requirement to conduct such data queries, as some in Congress have proposed, would be legally unnecessary and a step toward re-erecting pre-9/11 barriers to our ability to identify foreign terrorists and their contacts," he said.

Permanent reauthorization has some key advocates on the Hill — such as Sen. Tom Cotton (R-Ark.) — but there is also a powerful bipartisan group of lawmakers who believe the law needs key reforms. Lawmakers have expressed concern about the number of Americans swept up in the dragnet — a number the director of National Intelligence says is infeasible to produce because it would divert critical resources and endanger privacy by asking trained analysts to sift through U.S. people’s data.

That, combined with the controversy over “unmasking” — a process by which officials can request that the anonymized names of U.S. persons caught up in surveillance be identified for national security purposes — has endangered a clean reauthorization of the law. Rep. Darrell Issa (R-Calif.), a member of the House Judiciary Committee, which is currently negotiating a deal, told The Hill on Friday that closing the backdoor loophole “has to be” part of any reform package. Rep. Trey Gowdy (R-S.C.), another member of the committee, said in July that a clean reauthorization was “deader than dead.”

Sessions and Coats in their letter insisted that the privacy of Americans is scrupulously protected under FISA by so-called minimization procedures that are intended to limit the collection and retention of unredacted information on U.S. citizens and foreigners on U.S soil.

“The law requires the Intelligence Community to follow court approved targeting and minimization procedures designed to ensure compliance with the law's targeting restrictions and the requirements of the Fourth Amendment,” they wrote. “The procedures are designed to protect the privacy of U.S. persons whose nonpublic information may be incidentally acquired.”