WikiLeaks, a secret-sharing organization accused of playing a key role in Russian attempts to influence the 2016 U.S. presidential election, has released documents that it claims offer details of how Moscow uses state surveillance to spy on Internet and cellphone users. 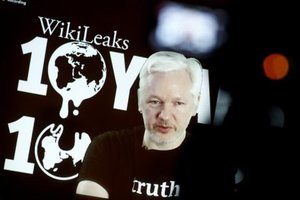 The release, dubbed “Spy Files Russia,” appears to mark a shift for an organization that has long been accused of a reluctance to publish documents that could be embarrassing for the Russian state.

As Edward Snowden, a former National Security Agency contractor who now lives in Russia, put it in a tweet: “Plot twist.” However, other experts are less impressed. “I don't think it's a real expose,” said Andrei Soldatov, a Russian investigative journalist and co-author of the “The Red Web: The Struggle Between Russia's Digital Dictators and the New Online Revolutionaries.” “It actually adds a few details to the picture, [but] it's not that much.”

“This system [SORM] has been known for some time, though the documents seem to provide additional technical specifications,” said Ben Buchanan, a postdoctoral fellow at the Harvard Kennedy School's Belfer Center and author of the book “The Cybersecurity Dilemma.”

Buchanan added, however, that he was intrigued that WikiLeaks would release it at all. “I'm curious if there is more to come,” he said. Although WikiLeaks has shared secrets from a variety of other governments, it has been accused of refusing to publish leaks on the Russian government. WikiLeaks also has been publicly critical of the Panama Papers — a leak about offshore banking entities that is believed to have embarrassed Russian President Vladimir Putin.

In interviews, WikiLeaks founder Julian Assange has suggested that because his organization lacks Russian speakers, whistleblowers prefer to leak to local media. The latest leak is unlikely to dispel the impression that WikiLeaks turns a blind eye to Moscow's failings, said Andrew Weiss, a vice president for studies at the Carnegie Endowment for International Peace. “It's very hard for WikiLeaks to somehow exonerate itself or remove the very clear pattern of cooperation with Russian authorities,” Weiss said.

“This looks like a classic attempt to change the subject,” he added. Perhaps the most intriguing part of the documents is whom they were leaked by — a detail WikiLeaks generally refuses to discuss. Soldatov said that they may well have been leaked by someone who understood the lack of major revelations they contained. “I would say it's coming from the company, sent by people who obviously understand it doesn't constitute a state secret, so it's safe,” he said.

However, although the release wasn't a bombshell, it could still prove to be a positive force, some observers said. “If it prompts people to talk about SORM, so be it,” Soldatov said.