Obama: Hey, we’re not spying on Americans much

Last night’s appearance on The Tonight Show with Jay Leno went about as well as normal for Barack Obama, apparently.  Leno brought up some uncomfortable topics, taking the President off of his economic campaign speech, and into unchartered waters — literally, as Joe Biden would say. 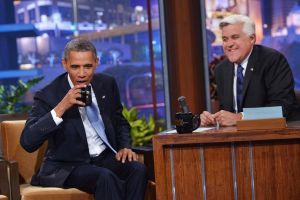 When pressed about the NSA’s widespread collection of domestic telephone and Internet records, Obama insisted that the NSA wasn’t spying on Americans … just keeping their records handy, or something:

“We don’t have a domestic spying program,” Obama said, according to the media pool report. “What we do have is some mechanisms that can track a phone number or an email address that is connected to a terrorist attack…That information is useful.”

Obama called the surveillance programs “a critical component to counterterrorism,” but acknowledged that they’ve “raised a lot of questions for people.”

This comes down to what people define as “spying,” apparently.  Most people would define it as collecting their communication records and storing them for data mining, while Obama defines it as only listening in on calls and reading e-mails.  That’s a thin edge of semantics on which to dance, and given the amount of information contained in metadata, even the edge might be illusory.

Obama then suggested that the US might have problems with the Olympics in Russia — not because they granted asylum to Edward Snowden or the suppression of political dissent, but because of Vladimir Putin’s treatment of the LGBT community.  Obama seemed a little unclear what the Russian role in the Olympics will be, too:

During an appearance on NBC’s “The Tonight Show,” Obama told host Jay Leno said he has “no patience for countries that try to treat gays and lesbians and transgendered persons in ways that intimidate them or are harmful to them.”

“I have been very clear that when it comes to universal rights, when it comes to people’s basic freedoms, that whether you’re discriminating on the basis of race, religion, gender, or sexual orientation you are violating the basic morality that I think should transcend every country,” he declared.

He also seemed to believe that Russia’s controversial new laws curbing apparent advocacy of homosexuality could cause problems at the 2014 winter Olympics in southern Russia.

“I think [Russian President Vladimir] Putin and Russia have a big stake in making sure the Olympics work,” he said.

“I think they understand that for most of the countries that participate in the Olympics, we wouldn’t tolerate gays and lesbians being treated differently — they’re athletes” he said. ”If Russia wants to uphold the Olympic spirit, then every judgment should be made on the track or in the swimming pool or on the balance beam and people’s sexual orientation shouldn’t have anything to do with it,” he said.

Er, perhaps Obama doesn’t watch the Olympics after getting his personal bid for Chicago snubbed, but the Russians don’t judge all the events at the Olympics. The laws passed in Russia suppressing LGBT “propaganda” don’t have anything to do with judging a dive or the clock on the track … and neither of those sports take place in a winter Olympics anyway.  Neil Munro points this out in a dry aside for his Daily Caller article:

However, there’s no indication from Russia that the new rules would change the grading system for downhill skiing and other other events.

Finally, Obama talked about economics, but it was mainly the same patter as we’ve heard since 2007 — boosting government spending on infrastructure and distorting labor markets in wage laws.  Obama insisted that we need to invest in shipping infrastructure, especially in the Gulf of Mexico, apparently by moving the south Atlantic seaboard there (at the 3:05 mark, via Twitchy):

If we don’t deepen our ports all along the Gulf — places like Charleston, South Carolina, or Savannah, Georgia, or Jacksonville, Florida — if we don’t do that, those ships are going to go someplace else.  And we’ll lose jobs.  Businesses won’t locate here.

Maybe they’ll go to the actual Gulf of Mexico — you know, New Orleans, Mobile, Galveston, and so on. Twitchy offers this map to anyone confused about the location of Georgia and South Carolina, especially the White House: 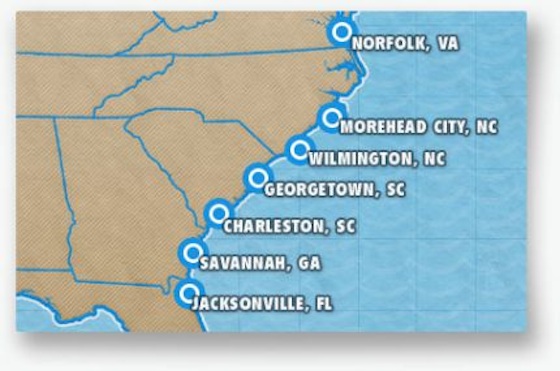 And this, unlike the other topics on which Leno pressed Obama, was part of the President’s prepared pitch on economics.

Kudos to Jay Leno for actually asking about a few topics other than the President’s own agenda, by the way.  As it turns out, Obama wasn’t even prepared for his own priorities, but Leno couldn’t have known that until the rest of us found out.