Colin Kaepernick, both for his skill on the field and for his refusal to stand during the national anthem in August last year, is one of the most prominent names in the NFL business, even if he doesn't have a team. 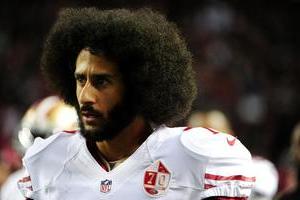 Given the polarizing nature of his protest, and the death threats Kaepernick said he subsequently received, he could do without his personal contact details, including his cellphone number and physical address, being leaked.

But that's what has happened, in a data leak from the website of the NFL Players Association that affects as many as 1,135 football players. And hackers may now have access to all that information, a security expert warned Tuesday. News of the leak came from Bob Diachenko, from cybersecurity company Kromtech Security. He told late last week that he'd come across an open Elasticsearch database sitting on a server for NFLPA.com.

Thanks to a misconfiguration, all the data inside was accessible to anyone who knew the right link, he said. Diachenko warned the database was already compromised when he found it, with a ransom note left inside in February this year.

Ostensibly, hackers had found the database, attempted to lock it up and demand payment to open it. That ransom note contained the threat that hackers would release information from the database to the public unless 0.1 bitcoins (worth approximately $428) was sent to their wallet. It's unclear if the ransomware attempt was successful; the bitcoin wallet had not received any funds at the time of publication. Similar attacks on Elasticsearch databases occurred earlier this year, according to forum posts.

The NFL Players Association didn't respond to repeated requests for comment. The body did, however, send alerts to agents Monday, noting that the organization had learned of a security hole from a European company (in this case Kromtech) but it had swiftly secured the data. Diachenko confirmed the database was secured on September 29, not long after his disclosure, though he'd not received any contact from NFLPA staff.

"We have worked with cybersecurity experts at Microsoft and our database consultant to determine the extent of the improper access. We are confident that it was limited to a two-hour period last week," the NFLPA wrote in its email, which was passed by an agent who asked to remain anonymous. The message confirmed players' home addresses, mobile numbers, email addresses, colleges, dates of birth and agent fees were included in the exposed data.

"We want to emphasize that no information about you or your player's Social Security Number or finances was in the data. Also, we are directly informing all players involved," the email noted. "In addition to our work with Microsoft, we are engaging an independent firm to do a full review of all of our cybersecurity measures."

While there are around 1,200 players included in the leak, it appears most were either currently or recently free agents, like Kaepernick (his representation didn't respond to a request for comment). Other names on the list were former Washington Redskins quarterback Robert Griffin III and ex-New York Jets cornerback Darrelle Revis.

Not all current and former NFL players who used the NFLPA site were affected, a fact that gave Adam Seifer, founder of Premier Athlete Advisors LLC and a certified agent, some relief. Worries remained, however. "As an agent who is also a licensed attorney and as such is entrusted with protected information on a daily basis, I am always concerned about my clients' rights to privacy and confidentiality," he added. "So a breach of this nature is clearly concerning to me."