North Korea has reportedly stolen a large amount of joint US-South Korean war plans, including details on how Kim Jong-un is to be assassinated during a potential conflict. 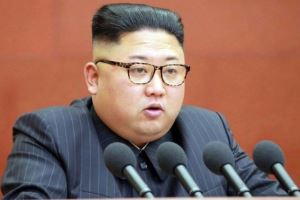 Defence officials had previously admitted the breach but said no significant information had been stolen. However, Mr Rhee said the hackers had accessed OPLAN 5015, which is part of the most recent blueprint for war with North Korea that was drawn up by Seoul and Washington in 2015. Hackers also stole plans for “carrying out pinpoint decapitation operations against top North Korean leaders”, the Chosun Ilbo newspaper said.

Mr Rhee said some 235 GB of data was stolen but only 22.5 percent, or about 10,700 documents, have been identified. Personnel reports on key South Korean and US military officials were among the documents that were identified, along with data on military installations and power plants in the South.

Minutes from meetings about South Korean and US military drills were also compromised. Tensions have escalated sharply on the Korean peninsula in recent months with US President Donald Trump engaging in a bitter war of words with Pyongyang.

North Korea last month carried out its sixth and most powerful nuclear test. It has also carried out a series of missile tests which have alarmed the world.