How to turn your watch, shoes, or household junk into a password

One day, your household items and accessories could become a new way to authenticate yourself online, according to researchers. 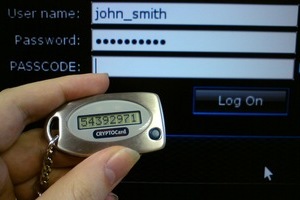 Many websites and online services are now enforcing or at least offering two-factor authentication (2FA) as a way to enhance the security of your accounts.

We all know passwords are less than ideal these days, being susceptible to brute-force hacking as many of us use simple, repetitive phrases -- not to mention the flood of data leaks taking place every day -- and so other methods are now needed. Two-factor authentication utilizes a second method of verification to check someone's identity. Often, this is through an email address or mobile device, whereas a secondary dynamic access code is sent to complete authentication. However, researchers from Florida International University and Bloomberg have come up with another novel method using your mobile device's camera.

Pixie is a research project which explores how 2FA can be implemented through cameras without the need for additional hardware. First described last month in the Proceedings of the ACM on Interactive, Mobile, Wearable, and Ubiquitous Technologies, Pixie uses a camera and a "physical token" -- whether this be jewelry, an accessory, or household junk -- which is called a "trinket."

In a research paper (.PDF) explaining the project, the research team says trust is established through the trinket, which is known to be owned by the individual asking for authentication. A photo of the item is taken, and then a machine learning system called a "supervised learning classifier" is then used to distinguish the object no matter the angle of the photo, as well as to determine any small differences which may suggest the item is fake or unacceptable.

The team used 40,000 images of household items from public datasets to conduct millions of brute-force authentication attempts, of which the Pixie system achieved a false acceptance rate of below 0.09 percent. In a public trial with 42 participants, over the span of eight days, Pixie "outperformed text-based passwords on memorability, speed, and user preference," according to the researchers.

During tests, shoes, wearable accessories, clothing, and even a Santa ornament were all used as trinkets. Each trinket is meant to be kept secret and authentication happens locally, and so network-based attacks would become irrelevant. A mobile app and APK for Pixie have now been developed. The app currently requires OpenCV Manager -- compatible with arm7 processors -- and may not be compatible with arm8 architecture or others, yet. The system has been tested on an HTC One device.

It's an interesting concept and may be an idea that captures the interest of businesses and consumers alike in the future. Today, a balance between security and user experience is at the forefront, with convenience almost considered a right, rather than a privilege. Snapping a photo is easy to do, and if this kind of 2FA is kept secure, it could become a worthwhile alternative to codes and secondary passwords.