The train is watching you!

Even in the 2000s, when you stepped onto a bus or train and looked around, you saw people reading books and newspapers, for the most part. 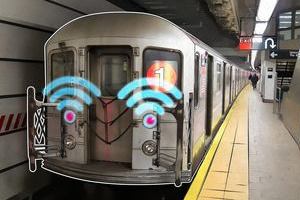 Fast-forward 10 years, and now 9 in 10 are looking at their smartphones or tablets, either chatting in WhatsApp or Telegram, or browsing through Facebook, Instagram, or Snapchat, liking kittens, food shots, selfies on the beach, and whatnot.

You probably use social networks on the go as well. Having a powerful mobile device and always being connected is very handy: It means in addition to using social networks, you can do online banking with a couple of taps, get a taxi, buy a new scarf, and do a lot of other things. The smartphone both saves time and gives you a thousand ways to kill it. Having Wi-Fi everywhere is handy, too: You no longer need to survive those minutes on the bus, you can use them to do whatever you like. A lot of cities have free Wi-Fi in their public transportation systems, not to mention cafés, where Wi-Fi is omnipresent. And people use it, eagerly and heavily, never paying attention to the security aspect.

What’s the problem with security on free Wi-Fi? Well, numerous threats lie in wait on free wireless connections, affecting both security and privacy. Direct threats to security (fake networks aimed at intercepting valuable data, man-in-the-middle, or MITM, attacks, and so forth) are scarier, but also less common. However, almost every open Wi-Fi hotspot is itself a threat to privacy, collecting data about you to sell to third parties that, in turn, want to sell something to you. So, lots of open Wi-Fi networks spy on you — and most of them even state it openly in their EULAs.

We’ve written about free Wi-Fi insecurity a couple of times already, but we realize that not using it at all isn’t an acceptable solution for most people. It’s too convenient, and convenience usually outweighs security in people’s minds. So basically, the question is not about using or not using free Wi-Fi, but about how to use it and still stay secure.

There is a solution to that espionage problem — you can use a VPN on your mobile device. Here’s a very brief explanation: A VPN is a secure connection to a remote server. It encrypts all of the data you send and receive and thus secures it in transit. Anyone trying to spy on you in that open Wi-Fi network sees only a stream of encrypted traffic they won’t be able to decrypt. That’s how you can avoid additional data collection and other threats. But you have to remember to launch a VPN every time you step on the bus or connect to a Wi-Fi network in a café.