Apple has patented a piece of technology which would allow government and police to block transmission of information, including video and photographs, from any public gathering or venue they deem “sensitive”, and “protected from externalities.” 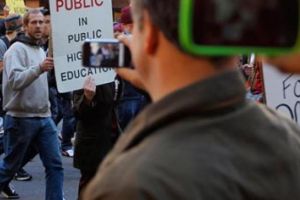 In other words, these powers will have control over what can and cannot be documented on wireless devices during any public event.

And while the company says the affected sites are to be mostly cinemas, theaters, concert grounds and similar locations, Apple Inc. also says “covert police or government operations may require complete ‘blackout’ conditions.”

The statement led many to believe that authorities and police could now use the patented feature during protests or rallies to block the transmission of video footage and photographs from the scene, including those of police brutality, which at times of major events immediately flood news networks and video websites.

Apple patented the means to transmit an encoded signal to all wireless devices, commanding them to disable recording functions.

Those policies would be activated by GPS, and WiFi or mobile base-stations, which would ring-fence (“geofence”) around a building or a “sensitive area” to prevent phone cameras from taking pictures or recording video.

Apple may implement the technology, but it would not be Apple’s decision to activate the “feature” – it would be down governments, businesses and network owners to set such policies, analyzes ZDNet technology website.

Having invented one of the most sophisticated mobile devices, Apple now appears to be looking for ways to restrict its use.

“As wireless devices such as cellular telephones, pagers, personal media devices and smartphones become ubiquitous, more and more people are carrying these devices in various social and professional settings,” it explains in the patent. “The result is that these wireless devices can often annoy, frustrate, and even threaten people in sensitive venues.”