Google's AI can now spot shoulder-surfers peeking at your screen

Google researchers have developed a privacy application that can instantly detect when a stranger glances at your screen over your shoulder. 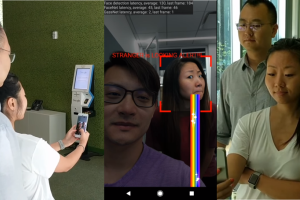 The pair haven't released a paper that explains technology, but a video demonstration suggests they've installed a lightweight machine-learning model on a Pixel smartphone that uses its front-facing camera for rapid gaze detection. When the user holds a phone up to chat or view a private video, say, on a train or other crowded place, the algorithm will detect when someone else from behind begins looking at the screen too. The video shows that the algorithm can detect a stranger's gaze within milliseconds.

The two Google researchers call their application an 'electronic screen protector', which combines the two areas of computer vision research to provide enhanced privacy when using a big-screen smartphone in public spaces.

The application builds on face-authentication systems already on smartphones by using the enrolled face to distinguish between the user and a stranger, while the gaze-estimation model helps detect the stranger's gaze almost instantaneously.

"Hence, the application, an electronic screen protector, can enable its enrolled users to continue reading private and confidential contents on your mobile device, while protecting their privacy from onlookers in a crowded space such as the subway or an elevator."