It was an audacious scheme: an attempted inside job at the office of a federal watchdog agency, where the cops, the authorities said, became the robbers. 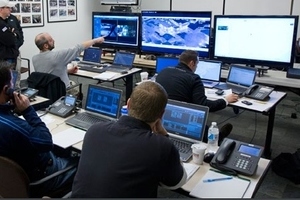 Three employees in the inspector general’s office for the Department of Homeland Security stole a computer system that contained sensitive personal information of about 246,000 agency employees, according to three United States officials and a report sent to Congress last week.

They planned to modify the office’s proprietary software for managing investigative and disciplinary cases so that they could market and sell it to other inspector general offices across the federal government. The Homeland Security Department is investigating, along with the United States attorney’s office for the District of Columbia.

The personal information included names, social security numbers and dates of birth — a rich trove of data not unlike those stolen from other government agencies in high-profile cases in recent years. On the home computer of one of the suspects that was seized during a raid in the spring, investigators also found about 159,000 case files.

But investigators determined the private information was not, in fact, their target. Investigators believe the suspects intended to use the data to “facilitate the development and testing of” their knockoff system, according to the report. In May, the office of the inspector general, John Roth, first notified several congressional committees with oversight of the Homeland Security Department, including the committees for homeland security, appropriations and commerce. Additional updates were sent to those panels in June and another last week.

Mr. Roth did not identify the employees, one of whom has left the office, and the American officials, who spoke on the condition of anonymity to discuss a continuing case, declined to name them. The two current employees have been suspended pending the results of the investigation.

In its report to Congress, Mr. Roth’s office said that it had “seized all known servers and other devices potentially containing exfiltrated data in the possession of the subjects.” A spokesman for the Department of Homeland Security declined to comment on Tuesday about the investigation. William Miller, a spokesman for the United States attorney’s office in Washington, said he could not confirm or deny the existence of an investigation. The breach was earlier reported.

In the past two years, several government agencies, including the Internal Revenue Service, the Securities and Exchange Commission, the State Department and the National Security Agency, have had data stolen, American officials said. The most significant case was in 2015, when hackers linked to the Chinese military stole records connected to more than 21 million government employees, including those with high-level security clearances.

The acting secretary for homeland security, Elaine Duke, elected in August to notify victims of the breach and the department is in the process of doing so, according to its most recent report to Congress. In recent weeks, the department has asked its component agencies to try to find additional money from their budgets to cover the hundreds of thousands of dollars needed to to monitor the credit scores of affected employees, according to an official familiar with the request.