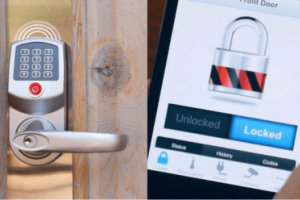 Researchers say if the devices deployed with default configurations, attackers could abuse the systems by sending unauthenticated requests to door controllers via serial communication over TCP/IP. “An attacker with network access to vulnerable door controllers could remotely trigger door lock and unlock commands,” wrote Secureworks in technical write-up of the vulnerability. Researchers achieved this by monitoring TCP network traffic between the AMAG Symmetry access control server and the EN-1DBC and EN-2DBC door controllers.

They were then able to reverse engineer the data structure of the unauthenticated network communication to create requests to lock and unlock doors. In addition, researchers devised a way for an attacker to inject arbitrary ID badge information into the locks’ internal controller databases, allowing the adversary to lock and unlock doors with illegitimate ID badges.

“The lack of encryption in the default deployment of devices allows attackers to inject fake values of RFID badges into keyless door’s controller database,” said Mike Kelly, principal consultant, with Secureworks’ Red Team. “Once that’s done, I can use a illegitimate RFID badge and open the door,” he said.

Secureworks researchers Kelly and John Mocuta, principal security consultant at Secureworks, are both credited for discovering the vulnerability earlier this summer. The bug was publicly disclosed Saturday.

“This vulnerability is an out of the box situation with default program settings,” AMAG states in the Secureworks report. “All AMAG products currently supported (which includes the EN-1DBC and EN-2DBC listed) include AES encrypted communications between network components if configured.”

AMAG Technology told via email the issue only impacts the EN-1DBC and EN-2DBC controllers. “Customers decide whether or not to turn on encryption.  AMAG highly recommends all customers implement encryption,” the company said.

The vulnerability (CVE-2017-16241) has a CVSS severity rating of high (9.3). Secureworks found the vulnerability in April and after several attempts, AMAG acknowledged the issue on May 25 and public disclosure of vulnerability was Dec. 8. Mitigation against outside attacks includes simply enabling encryption on affected devices.

“A lot of devices are not built to be secure by default,” said Trenton Ivey, offensive researcher. “Instead, they’re built to be convenient by default. What we find is people buy a device and expect it to perform a desired function out of the box and then leave it at that. Vendors are starting to become more aware of this problem. But the IoT space and other sectors are still a bit behind on the idea of building systems secure by default,” Ivey said.