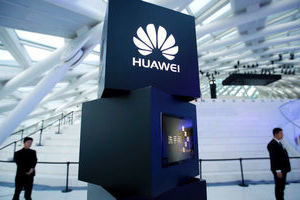 It wasn’t immediately clear why AT&T bounced on its deal with the Shenzen, China-based manufacturer just one day before it was expected to announce the U.S. partnership at the Consumer Electronics Show in Las Vegas on Tuesday.

AT&T remained tight-lipped to the Journal and all Huawei would comment is that it has “proven itself by delivering premium devices with integrity globally and in the U.S. market.” Huawei devices are available in the U.S. at some retail stores and online, though as the experts noted, the brand has no bundle deals with major U.S. carriers. For years, the technology giant has been largely shut out of both the consumer and telecom equipment industry stateside due to fears it would spy on Americans—even as it’s expanded to a $75-billion-a-year business and offered much cheaper technology than U.S. competitors, per the paper:

Huawei’s dominance is again stoking fears among Washington security and intelligence experts, who worry major U.S. carriers might be tempted to turn to Huawei. Last month, members of the Senate and House intelligence committees sent a letter asking the Federal Communications Commission to review any relationship with Huawei and requested that the FCC get briefed on the security concerns raised in 2012. The letter also raised concerns about Huawei’s growing smartphone business, now the world’s No. 3 brand behind Samsung Electronics Co. and Apple Inc.

Concerns over a potential AT&T deal—which may have also involved cheaper 5G equipment—escalated to the point where National Security Agency director Michael Rogers and former FBI director James Comey “personally spoke to senior AT&T management.” As the matter escalated, Huawei said it would be open to letting independent security experts examine its phones and telecom equipment for potential vulnerabilities or backdoors.

Huawei was heavily advertising its Mate 10 Pro smartphone in the U.S., and a partnership with AT&T seemed to be its launch vehicle. Though the announcement doesn’t mean the Mate 10 Pro is suddenly going to become unavailable to U.S. consumers, it probably means a serious blow to the phone’s business prospects here.

Ken Hu, one of Huawei’s top three executives, strongly denied any allegations that it is “a vehicle for any government or any agency of putting surveillance on another country” in a statement.