This is what a 50-qubit quantum computer looks like

From afar, it looks like a steampunk chandelier. An intricate collection of tubes and wires that culminate in a small steel cylinder at the bottom. 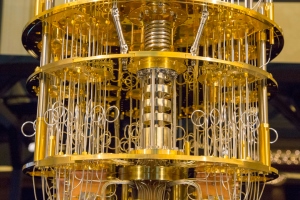 It is, in fact, one of the most sophisticated quantum computers ever built. The processor inside has 50 quantum bits, or qubits, that process tasks in a (potentially) revolutionary way. Normally, information is created and stored as a series of ones and zeroes.

Qubits can represent both values at the same time (known as superposition), which means a quantum computer can theoretically test the two simultaneously. Add more qubits and this hard-to-believe computational power increases. Last November, IBM unveiled the world's first 50-qubit quantum computer. It lives in a laboratory, inside a giant white case, with pumps to keep it cool and some traditional computers to manage the tasks or algorithms being initiated.

At CES this year, the company brought the innards -- the wires and tubes required to send signals to the chip and keep the system cool -- so reporters and attendees could better understand how it works. The biggest challenge, IBM Research Vice President Jeffrey Welser told me, is isolating the chip from unwanted "noise." This includes electrical, magnetic and thermal noise -- just the temperature of the room renders the whole machine useless.

That's where the pumps would normally come in. From top to bottom, the system gradually cools from four Kelvin -- liquid-helium temperatures -- to 800 milliKelvin, 100 milliKelvin and, finally, 10 milliKelvin. Inside the canister, that's 10 thousandths of a degree above absolute zero.

The wires, meanwhile, carry RF-frequency signals down to the chip. These are then mapped onto the qubits, executing whatever program the research team wishes to run. The wiring is also designed in a way to ensure that no extraneous noise -- including heat -- is transported to the quantum computer chip at the bottom.

Many in the industry have suggested that a 50-qubit system could achieve "quantum supremacy." The term refers to the moment when a quantum computer is able to outperform a traditional system or accomplish a task otherwise thought impossible. The problem, though, is that quantum computers are only compatible with certain algorithms. They're well-suited to quantum chemistry, for instance, and material simulations. But it's unlikely you'll ever use a quantum computer to complete a PowerPoint presentation. "The world is not classical, it's quantum, so if you want to simulate it you need a quantum computer," Welser said.

Researchers have already conducted experiments with quantum computers. Scientists at IBM were able to simulate beryllium hydride (BeH2) on a seven-qubit quantum processor last September, for example. But critics want to see a quantum computer accomplish something more tangible, which is more meaningful for the everyday consumer. That day, unfortunately, could still be a long way off.

"Somewhere between 50 and 100 qubits, we'll reach the point where we can at least say very clearly, 'I've just simulated a molecule here in a few minutes time that would have taken this giant system five days to do.' That level we'll be at fairly rapidly. When it gets to something that the public will understand in terms of an application they would use themselves, I can't really speculate at this point," Welser said.