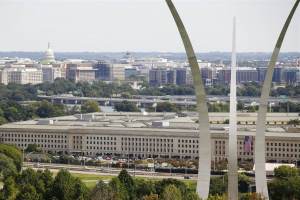 The low threshold for granting what is known as an interim security clearance should be cause for alarm inside the Trump White House, says Rep. Elijah Cummings, D-Md., ranking member of the House Oversight Committee. Cummings cited the report in calling on the committee's Republican chair, Trey Gowdy of South Carolina, to help him investigate the "troubling irregularities" with the security clearances held by President Donald Trump's senior aides.

The report captured data from 200,000 applications for secret or top secret clearance by defense contractors over the past three years, many of which were not fully adjudicated until 2017. It found that 486 applicants had their clearances denied or revoked. Of those applicants, 165 had slipped through the initial round of vetting and been allowed access to sensitive information.

The most common reason for denying a security clearance, the report concluded, was related to the applicant's finances, with over 370 applicants being denied clearance for "financial considerations." Felony charges were the cause for revoking 63 clearances, and evidence of foreign influence or foreign preference was found in 56 applications.

In 151 of the cases, applicants were granted an initial security clearance that was later revoked when it was discovered the applicant withheld information. In one example, a person given interim secret clearance in 2015 was discovered in 2017 to have been found guilty of raping a child prior to applying for the clearance.

The process for obtaining an interim clearance is the same for defense contractors as for senior White House aides. The FBI is responsible for reviewing the criminal history, financial records and foreign contacts of applicants for the White House, the Department of Defense and other agencies with employees that require clearance.

Trump's son-in-law and senior adviser, Jared Kushner, has been operating with an interim security clearance rather than a permanent clearance for more than a year, according to two law enforcement sources. Cummings has pressed the White House to disclose information on the status of Kushner's clearance as well as the clearance of Michael Flynn, Trump's former national security adviser, who was later fired and has now pleaded guilty to lying to the FBI.

In a letter to Gowdy on Wednesday, Cummings said the "extremely troubling data" from the Department of Defense should compel Gowdy to subpoena the White House on the status of senior aides' clearances.

"I believe that serious deficiencies in our nation's security clearance processes represent an urgent and grave risk to our national security," Cummings wrote. Gowdy's office did not immediately respond to a request for comment. A White House spokesperson said, "As we have said in the past, we do not discuss security clearances."

A former official at the FBI, which vets candidates for security clearances, said background investigations can be held up for months because of backlogs and complex backgrounds. Someone like Kushner, who has never served in government and has complex business dealings, can take longer to vet. Still, the official said, people at high levels of government are usually expedited.

Interim, or provisional, security clearances are necessary for many agencies to fill their jobs while the final process plays out, the official said.

Under U.S. law, the president has the authority to grant security clearance to whomever he sees fit, regardless of the FBI's findings. A former White House official who served in the Obama administration said it was the policy of that White House not to override the recommendations of the FBI when it came to hiring decisions for White House positions.