Steve Wozniak had his Bitcoins stolen

Purity is so hard to find. Everything is, in some way, tainted, even if you don't see it at first. 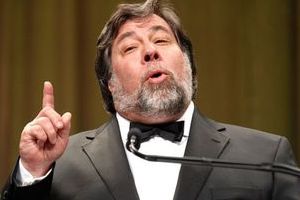 This painful truth seems to have descended upon one of the purer minds in tech, that of Apple co-founder Steve Wozniak. Speaking on Monday in New Delhi, India, at the Economic Times Global Business Summit, Woz explained that he was fascinated by the purity of cryptocurrency.

"Bitcoin to me was a currency that was not manipulated by the governments. It is mathematical. It is pure. It can't be altered," he said. Ah, but it seems it can be stolen. "I had seven bitcoins stolen from me through fraud," he said. "Somebody bought them from me online through a credit card and they cancelled the credit card payment. It was that easy." If it was that easy, some might mutter, then this alleged purity needs a little stiffening with a bit of real-world security.

Bitcoin transactions cannot be reversed. On the other hand, credit card companies can reverse fraudulent transactions. However, Woz explained: "It was from a stolen credit card number, so you can never get it back." Seven Bitcoins, at today's prices, would be worth almost $75,000.

That's quite some theft. Woz didn't immediately respond to a request for comment. However, he said in India that he'd moved to sell the Bitcoins because he didn't want to watch their value go up and down every day. Though proponents of Bitcoin proclaim its Nirvana-ish idealism, all sorts of people try to get hold of coins by less than ideal means. Some websites, for example, use other people's computers to mine cryptocurrency.

There are those who believe Bitcoin offers a swift path to riches. There's evidence that some people are even taking out mortgages to buy the cryptocurrency. It's worth being cautious, however. Swift paths to riches are covered in broken glass. Security: Stay up-to-date on the latest in breaches, hacks, fixes and all those cybersecurity issues that keep you up at night. Apple: See what's up with the tech giant as it readies new iPhones and more.