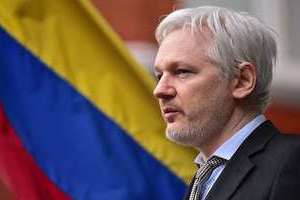 The Ecuadorian government said in statement that it had acted because Assange had breached “a written commitment made to the government at the end of 2017 not to issue messages that might interfere with other states”.

It said Assange’s recent behaviour on social media “put at risk the good relations [Ecuador] maintains with the United Kingdom, with the other states of the European Union, and with other nations”. The move came after Assange tweeted on Monday challenging Britain’s accusation that Russia was responsible for the nerve agent poisoning of a Russian former double agent and his daughter in the English city of Salisbury earlier this month. The WikiLeaks founder also questioned the decision by the UK and more than 20 other countries to retaliate against the poisoning by expelling Russian diplomats deemed spies.

Assange has lived in the embassy since June 2012 to avoid extradition to Sweden over allegations of sex crimes he denies. Sweden has dropped the case but Assange remains subject to arrest in the UK for jumping bail and fears he will be extradited to the US for questioning about WikiLeaks’ activities if he leaves the embassy building.

Ecuador previously cut Assange’s internet access in the embassy in October 2016 over fears he was using it to interfere in the US presidential election following Wikileaks’ publication of leaked emails from the Democratic National Committee (DNC) and Hillary Clinton’s campaign adviser, John Podesta.

In May 2017 the Ecuadorian president, Lenin Moreno, again asked Assange to refrain from commenting on Spain’s dispute with the separatist region of Catalonia. Assange had tweeted that Madrid was guilty of “repression”. As part of a subsequent agreement between Assange and the Ecuadorian government, he is not permitted to send any messages that could interfere with Ecuador’s relations with other countries.

Assange’s comments on the nerve agent attack on double agent Sergei Skripal and his daughter Yulia prompted the British foreign office minister Alan Duncan to call him a “miserable little worm” during a Commons debate on Tuesday. Duncan said he should leave the embassy and surrender to British justice.

Assange replied: “Britain should come clean on whether it intends to extradite me to the United States for publishing the truth and cease its ongoing violation of the UN rulings in this matter. “If it does this disgraceful impasse can be resolved tomorrow. I have already fully served any theoretical (I haven’t been charged) ‘bail violation’ whilst in prison and under house arrest. So why is there a warrant for my arrest?”

The former Greek finance minister, Yanis Varoufakis, and the music producer Brian Eno said in a statement they had heard “with great concern” about Assange’s lost internet access. “Only extraordinary pressure from the US and the Spanish governments can explain why Ecuador’s authorities should have taken such appalling steps in isolating Julian,” they pair said, adding Assange had only recently been granted citizenship.

“Clearly, Ecuador’s government has been subjected to bullying over its decision to grant Julian asylum, support and ultimately, diplomatic status.”