Vulnerabilities on the Wi-Fi networks of a number of rail operators could expose customers' credit card information, according to infosec biz Pen Test Partners this week. 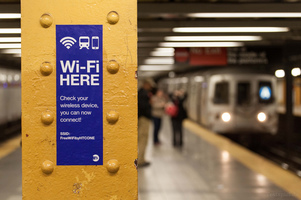 The research was conducted over several years, said Pen Test's Ken Munro. "In most cases they are pretty secure, although whether the Wi-Fi works or not is another matter," he added.

But in a handful of cases Munro was able to bridge the wireless network to the wired network and find a database server containing default credentials, enabling him to access the credit card data of customers paying for the Wi-Fi, including the passenger's name, email address and card details. He said he was not aware of any incidents of networks being compromised but warned in the worst-case scenario it might be possible for miscreants to take control of the train. "It might be possible, and this is speculation, to lock the braking system." Munro refused to name the operators affected by the weak security set-up - the vulnerabilities still exist.

The security hole could be prevented by increasing the complexity of login credentials, which often haven't been changed from the default or are too simple.

Munro said weak credentials mean a hacker can also change the routing, potentially allowing them access to more sensitive networks on the train. Part of the problem is a lack of segregation between the Wi-Fi networks. This could be solved by ensuring passengers can only route traffic from their devices to the internet. The wireless router admin interface should not be accessible to passengers either.

Operators must also check that the admin interface cannot be accessed, which is often available on the gateway IP address. Completely isolated, physically separate hardware for passenger Wi-Fi is preferable. A separate survey recently found that the majority of consumers are potentially leaving themselves exposed to miscreants by failing to change the password and security setting on their routers.